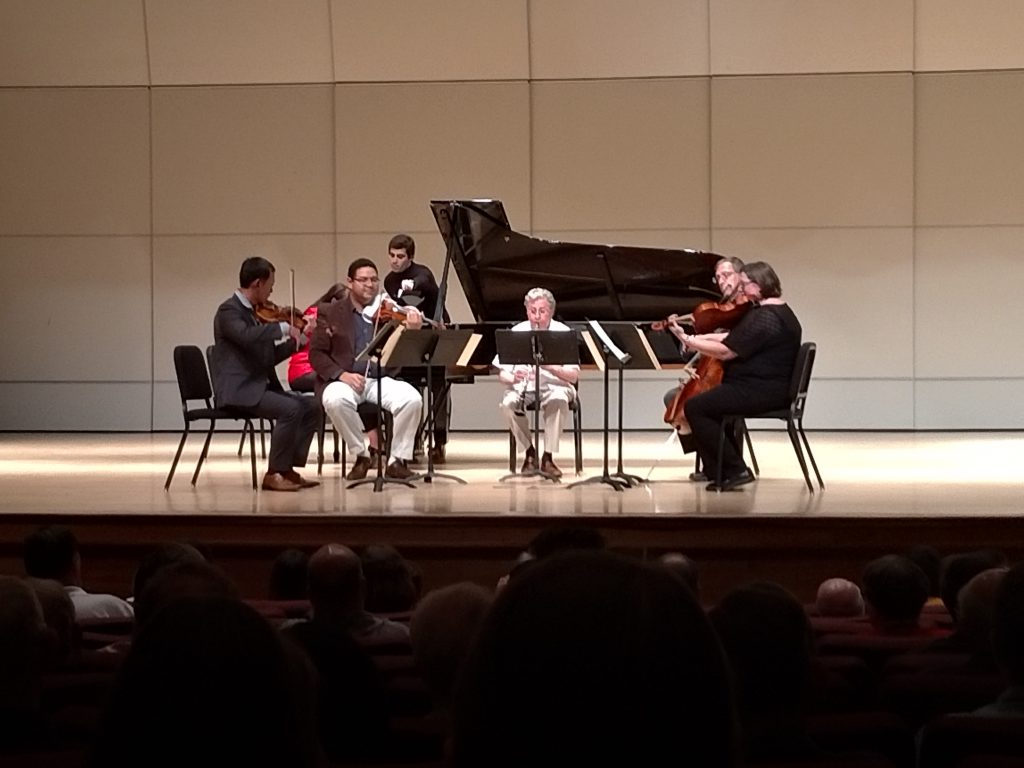 The first day of ClarinetFest® 2019 ended with an outstanding concert of chamber works with the Knoxville Symphony String Quartet. After a brief presentation by Daraja Music Initiative about its work with Clarinets for Conservation, the concert began with a unique and relatively unknown arrangement of the Francis Poulenc Sonata for Clarinet for string quartet and clarinet. Soloist Bil Jackson brought out the unique colors of this arrangement with his fluid technique and energetic interpretation.

The next work on the concert was the winning composition in the 2019 ICA Composition Competition, Haze 1 by Paul Kopetz, which was performed by James Zimmermann and the KSO Quartet. This modern, minimalistic work was a nice contrast to the more tonal Poulenc, featuring a bit of extended technique in the clarinet, which was performed to great effect by Zimmermann.

Milan Rericha followed the Kopetz with two movements of the Quintet in B-flat, Op. 34 by Carl Maria von Weber. Rericha played with incredible personality, energy and control, receiving roaring applause from the audience at the conclusion of his performance. The KSO Quartet also really shined in this work as well.

The next work on the program, Valerie Coleman’s Shotgun Houses, was performed by the KSO Quartet and Mariam Adam. Adam briefly explained the origins of the work prior to performing two of the movements. Based on the life of Cassius Clay, the work had a very quintessentially American sound. This was only the second performance of the work and Adam played it beautifully.

The concert finished with a performance of Sergei Prokofiev’s wonderful work for clarinet, string quartet and piano Overture on Hebrew Themes, Op. 34. ICA Honorary Member Stanley Drucker, along with pianist Ekaterina Tangarova and the KSO Quartet, gave a fantastic performance full of energy and spirit to close the first evening concert and first day of ClarinetFest® 2019.

Following the evening concert, there was a President’s Reception in the Student Union celebrating the sponsors, honorary members, the past presidents of the ICA, and the Artistic Leadership Team.

The ClarinetFest 2019 Writing Team will be blogging and posting on social media all throughout the festival, so check back f0r more content daily!

NOTE from Zvi Josman about the Poulenc Sonata arrangement:
I am excited that Bil Jackson is to premiere an arrangement by Yaakov Barnea at tonight’s opening concert. I communicated this to Yaakov last Saturday night before flying from Israel to the US and he is very thrilled. I would like to provide you with some background info.
Yaakov was born on a Kibbutz in north Israel and was a protege of the late Yonah Ettlinger, joining the Israel Philharmonic at the age of 21, where he served as co-principal clarinet for 42 years, retiring in 2005. I was privileged to study with Yonah for a year (before he left for Paris to study conducting), and then continued studying with Yaakov for 7 years. A few years ago during one of my visits to Yaakov, he showed me a trove of handwritten manuscripts – arrangements for string quartet and clarinet of major works for clarinet and piano or orchestra. It appears that over the years he had painstakingly labored over these arrangements (he also played cello) and they had all barely been performed.
I offered and received his permission to scan, prepare and disseminate the materials to eminent players world over. His only request has been to mention his arrangement whenever it is being performed. Tonight’s performance is indeed an important landmark for our clarinet community.
A special thank you to my friend Brad Behn who served as the matchmaker between Bil and me, resulting in the premiere performance tonight.
Many thanks,
Zvi Josman, Ph.D.
Professor, Bar-Ilan University, Israel