The albums selected for my final column as Audio Reviews Editor both stem from the same impetus: the clarinet as a collaborative instrument. Each features the instrument in unique pairings and textures, some more familiar than others, but all effective and well-conceived. It speaks volumes about the instrument’s ability to blend harmoniously with a variety of other timbres and even more about the collaborative experience in making music. As I prepare to hand off Audio Reviews to my fellow collaborator, Karl Kolbeck, I find myself marveling at what can be accomplished when we combine talents, strategies and efforts toward a common purpose. 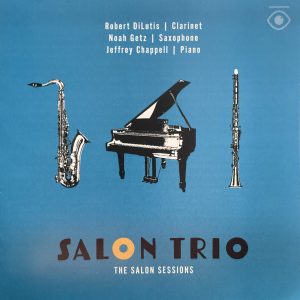 This album spawned out of a 3+ year collaboration between clarinetist Robert DiLutis, saxophonist Noah Getz and pianist Jeffrey Chappell. The group regularly performed salon-style concerts in the homes of art patrons in the Washington, D.C. metro area. In true chamber music style, the artists were able to make personal connections with their audiences, sharing stories and anecdotes about the repertoire and composers. The Salon Sessions contains several of the works performed as part of the concerts and conveys an equally personable and intimate concert experience.

John Heins’s Capriccio For Clarinet, Saxophone and Piano is a delightfully appetizing work that opens the album. Hein’s compositional style is neo-Romantic and engaging. The work’s first section is circus-like in character with lots of imitation between the clarinet and saxophone. The technique from DiLutis and Getz is bubbly and ebullient with swirling contours and stellar rhythmic precision and perfect intonation. Chapell’s piano articulation is remarkably clean and clear, making for vibrant and distinct hemiolas. Successive cadenzas for the saxophone and clarinet are performed with spirit and gusto, yielding to a more pensive, slow section before returning to the opening thematic material. Overall this work demonstrates the unique blend of sound that can be achieved between clarinet and saxophone, which DiLutis and Getz expertly convey.

Four Letter Words for Wind Trio by David Heinick features four short, charming vignettes in contrasting styles. “Wary” contains slow-moving, lugubrious lines constructed in atonal language. “Busy” is rhythmically buoyant with pristine hocket between Getz and DiLutis. “Lazy” is surprisingly reflective and forward-moving but is performed with grace and beauty by all members of the trio. The final movement, “Edgy,” contains incisive, biting articulations and jazz-infused rhythmic ostinatos that showcase the trio’s versatility and virtuosity.

A Salon Trio commission, Jessica Krash’s Hand in Hand was inspired by her first trip to India and other travels. There is a pleasant vocal quality to Getz’s and DiLutis’s tone that lends itself well to this work. The conversational opening transforms into more unison playing above an undulating piano current. This single-movement piece is a tapestry of varied styles and perfectly balances lyrical and technical playing.

Ragamuffins by James Grant is a programmatic work and one of two works on the album scored for clarinet/saxophone duo. It is characterized by tasteful dissonances, large intervals and ragtime influence. DiLutis and Getz perform with proficient skill and achieve an interpretation that is equally charming and mischievous.

The trio’s pianist, Jeffrey Chappell, is also a featured composer on this album. His Afrodite in Alba in rooted in jazz improvisation. The work is remarkably heartfelt and performed with delicate sentimentality from Chappell, DiLutis and Getz. The unwavering, pulsing piano lines pair perfectly with the whimsical melodic playing in the clarinet and saxophone. Although this album contains many fine works that listeners will find appealing, Chappell’s composition is sure to be a stand-out favorite.

Leon Stein’s Trio for Clarinet, Saxophone and Piano is a large-scale, four-movement work that uses the formal frameworks of the later Romantic period but with a modern twist to the harmonic language. The first movement’s sonata-allegro form is obvious, and the ensemble achieves a perfect contrast in style between the principal and secondary themes. Motivic fragmentation is featured heavily in the development. DiLutis and Getz succeed in blending seamlessly throughout the movement. The second movement’s melody recalls Varése’s Octandre with its prominent major seventh melodic constructions. Its opening phrases are scored without piano and the resulting timbre from DiLutis and Getz is ethereal, soft and foreboding. The third movement, “Allegro,” is a quippish and bustling scherzo that gives way to a rousing final movement imbued with frequent shifts in meter and cascading, razor-sharp articulations.

Gregory Wanamaker’s well-known Duo Sonata is the final work and the second on this album for clarinet and saxophone exclusively. The perfect intonation and rhythmic alignment in the opening movement, “Departure,” create a meta-instrument timbre that impeccably hybridizes DiLutis and Getz’s sound. The faultless intonation is further displayed in the “Elegy” where sonorities of perfect 5ths and unisons resonate freely and unblemished. In the brief “Scherzo” both performers capably attain rhythmic precision with simple and compound meters alternating in the parts. The finale, “Arrival,” is fast and funky and grooves
to a satisfying and exciting conclusion to the album.

Throughout the disc, DiLutis performs with a chiseled, refined and rich tone and effortless technique. The album is a terrific addition to the repertoire for single-reed chamber music and is impeccably well done and highly recommended! 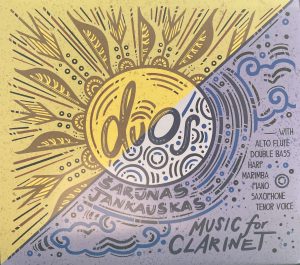 Duos contains several works for the clarinet and another part in somewhat non-traditional pairs. Šarūnas Jankauskas was involved in the genesis of nearly
every work on the album, which is the capstone of a years-long project. Each work on this disc is a unique listening experience and the album brings engaging and refreshing new pieces to the canon of duo repertoire.

The opening work, Jason Haney’s Fernweh, is full of longing and nostalgia. Translated roughly as “homesickness, but for a place you’ve never visited,” this work for clarinet and harp is spacious and poignant. Jankauskas’s tone is rich and deep in the chalumeau register and appropriately vibrant in the upper partials. Both he and harpist Jaclyn Wappel deserve credit for the even, ever-evolving pacing of the piece. Scrupulous detail has been given to ensemble attack and intonation, resulting in a remarkably reflective and engaging interpretation.

blur by Paul Kerekes is scored for clarinet and alto flute. Beth Chandler’s articulations on the alto flute are refreshingly pointed and clear. Throughout, the intonation from both players is astoundingly on point resulting in seamless tradeoffs of unison pitches and continuous, meditative ostinatos. Often it is difficult to discern which instrument is playing.

Jankauskas’s duality as a performer and composer is showcased in his Four Somewhat Connected Visions, a set of four short movements for clarinet and tenor saxophone. His whirling, fluent technical passagework throughout the entire clarinet range in “Awaiting Takeoff” is sinuous and seamless. The juxtaposition of loud and soft dynamic between the two instruments offers a unique and effective contrast. Jankauskas and saxophonist David Pope are perfectly-matched forces. Pope’s playing in the third movement, “Things I Told You Yesterday,” is passionate and songlike with full-voiced multiphonics. The final movement is a powerful theme and variations on the hymn “Down to the River to Pray” which Pope and Jankauskas deliver with soul and spirit.

Fragments by Richard Lavenda is composed for clarinet and tenor voice. Jankauskas extended solo passages are proficiently paced and contain an enlivening contrast of range and dynamic. More than any work on the album, his control and nuance of tone shine through here. He perfectly emulates tenor Jamison Walker’s resonate, unblemished diction and elocution. The lyrics are delightfully witty and make for a beguiling rendition of the piece.

Gabriel Santiago’s Choro for Kristin for clarinet and piano is the sole work on the album not commissioned by Jankauskas. Intimate and bourgeoning, the opening interplay unfolds into a fully-developed choro melody. Jankauska’s lyrical tone is unified across the registers and his articulation is keen, rhythmical and piquant. Pianist Paulo Steinberg contributes lush and rich harmonies that support Jankauska’s bittersweet lyricism.

nana for clarinet and marimba by Ethan Frederick Greene is a soft and introspective work. Jankauskas and Casey Cangelosi perform this work with immaculate intonation and a delicacy of articulation that is equally lulling and striking. The judicious use of silences contributes greatly to the effectiveness of the interpretation. Both performers are fully integrated in their execution of attack and phrase with perfect cohesion of time and contour. This is the most powerful and moving work on the disc. The final work, Zack Stanton’s Stompin’ Grounds, pairs the clarinet with the double bass. Jankauskas and bassist Mark Foley present a bluegrass-infused throwback to the composer’s roots. Jankauskas is totally in his element in this work with ripping technical runs, altissimo riffs and slap tonguing.

The album Duos is an effective example of the clarinet’s eclecticism. It showcases the varied styles and timbral blends of which the instrument is capable. Jankauskas is a consummate and versatile performer, and this album is a must for those interested in programming new works for clarinet in less-common duo combinations.