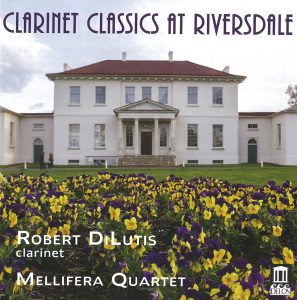 Inspired by the Riversdale House Museum in Riverdale, Maryland, Robert DiLutis’s new album Clarinet Classics at Riversdale is a myriad of some of the most charming and challenging music in the clarinet canon. Like DiLutis’s recently-reviewed album Mozart at the Mansion (see Audio Notes from December 2019), this disc was recorded at Riversdale House. The album’s concept stems from a collaboration between DiLutis and the museum director to create the Riversdale Chamber Music Society, which now hosts an annual concert series at the historic venue.

The disc opens with Weber’s Quintet for Clarinet and Strings, Op. 34. Often eclipsed by the quintets of Mozart and Brahms, Weber’s four-movement work is an important link between his Concertino, Op. 26, and the concertos, Op. 73-74; it also is a pivotal piece in the repertoire for clarinet and string quartet. Reinforced by the Mellifera String Quartet, DiLutis’s playing infuses this overlooked work with the charm and drama one would expect from classical opera rather than instrumental chamber music. In the opening Allegro, DiLutis’s playing is vibrant and buoyant, with a constant sense of forward motion and telos. He balances bubbly technical passages, humorous appoggiaturas and elegant cadential trills throughout the movement. The Fantasia is a doleful, melancholic aria with DiLutis taking the lead role. His tone is focused and centered in all registers, with a burning intensity through the longer sustains yielding to softer delicate releases. The Menuetto is saturated with wit that is readily conveyed in the conversation-like exchanges between DiLutis and the quartet. This is especially true at the end of the movement, which can be likened to the cliffhanger ending from Haydn’s Joke Quartet. DiLutis’s tempo in the final movement is not for the faint of heart. Here his technique is imbued with a lightness and speed that allows the demanding and awkward passagework to speak unlabored and diaphanously. The playing from the Mellifera String Quartet is exemplary and is especially prominent in this final movement.

The true highlight of the album is Miklós Rózsa’s Sonatina for Solo Clarinet. DiLutis is entirely in his element performing this work. His rich tone during the opening notes of the first movement lures listeners into the full theme and its variations. As the variations continuously evolve, DiLutis beguiles listeners with seamless, liquid-like technique and full-bodied sound; the result is music that is entirely entrancing and spellbinding. The notoriously difficult second movement is handled with serene control by DiLutis. The opening rips foreshadow the intensity and conviction with which he performs. He is unrestrained and unyielding in his interpretation, conveying technical and musical momentum that builds throughout the course of the movement toward a rollicking conclusion. Especially notable in both movements of this work is DiLutis’s ability to command a variety of tonal colors despite not having the aid of a harmonic accompaniment.

Glazunov’s Rêverie Orientale opens with a miniature clarinet cadenza reminiscent of the clarinet solos in Kodaly’s Galánta Dances. DiLutis’s sinuous playing is emotive and plaintive, with perfect color and depth. The Melliferra String Quartet is equally elegant and coloristic. The faultless intonation of perfect intervals in the accompaniment allows the melody to soar in both the clarinet and violin. In this work, DiLutis demonstrates his comfort in both leading and supporting roles, as the melodic content is divided equally between the clarinet and strings. The ensemble playing in this work fully achieves the exoticism and character of the East, making it a standout work from this album.

Erland von Koch’s Monolog 3 allows DiLutis another opportunity to demonstrate his total command of unaccompanied music. His captivating and fluid interpretation of this work is aided by his purely smooth and even command of all registers. DiLutis’s performance is so refined and elegant that one does not even think to notice the utter evenness of his tone and technical facilities. He makes it sound easy and effortless.

Heinrich Baermann’s Adagio (often mistakenly attributed to Richard Wagner) is presented in its intended instrumentation with DiLutis and Melliferra. This offers a refreshing listening of the work, which is more traditionally heard with piano accompaniment rather than with string quartet. Although intended as part of a larger quintet, this work is perfectly able to stand on its own. DiLutis’s control of dynamic crests and troughs gives life to the numerous sustained phrases. His warm tone allows the piece to gradually evolve and unfold in a very natural and relaxed manner.

In ending the album with Willson Osborne’s iconic Rhapsody for Solo Clarinet, DiLutis offers a uniquely sentimental denouement to the album. DiLutis’s playing is so coloristic and animated that one can glean the impression of uninhibited improvisation. Especially noteworthy are the entrances which seem to emerge from total silence into a rich and full clarinet tone. His interpretation is equal parts placid and fiery, and is executed with complete technical control and musical prowess. After building to a flurry of activity, DiLutis’s final notes on the album are quite tender. The resulting atmosphere after the work’s conclusion is poignant
and introspective.

The quality of the performance and mastering of this album make it very easy to recommend! The excellent liner notes not only provide valuable information about the works presented but also help express the personal connection DiLutis has with the music as well as its recording location. We can hope that he will generate even more recordings with these fine collaborators in this pristine space.