L’Orchestre de la Garde Républicaine (the Orchestra of the Republican Guard) is now 172 years old. As one of the oldest military orchestras in Europe, it has been on tour since the end of the 19th century and played an important part in making the French school of wind instruments famous all over the world. During the mid-1960s, Guy Deplus, my professor at the Paris Conservatoire, was principal clarinetist of the Garde Républicaine before he entered the Opéra de Paris orchestra. Personally, I have been serving in the ranks of the orchestra since 1985, and am now principal clarinet. I am glad to share information about my orchestra which is simply called, in French, “la Garde”!

Generally speaking, there are many connections between the history of this orchestra and the history of France, both in major events as well as anecdotal history. Let’s go back to May 1848 in Paris. There was serious trouble in the capital city. For security reasons, authorities decided to establish a regiment mainly to police the streets. The name of this regiment was Parisian Garde Républicaine. It consisted of very seasoned soldiers and officers, but there were also 36 drummers and eight cavalry bugle players. Jean-Georges Paulus was the appointed bandmaster.

But who was Paulus? Awarded a premier prix at the Conservatoire de Paris, he was a very good clarinetist as well as a famous bandmaster. Appointing a talented bandmaster suggests that military authorities wanted to institute a true wind ensemble within the Parisian Garde Républicaine. After very hard times in Paris resulting from political events, authorities probably thought it was necessary to strengthen the links between the army and Parisians. A high quality band conducted by a famous bandmaster could help to promote the image of the military as well as to turn the page of terrible times.

We don’t know a lot about the very beginning of the Garde, as most archives of that time disappeared because of a disastrous flood in Paris in 1910. The first noteworthy performance seems to be in 1852. Five hundred military musicians, including Paulus and his orchestra, gathered to celebrate the new leader of France, the Emperor-to-be, Napoléon the Third. They played extracts from the Messe Solennelle de Ste Cécile, a piece composed by Adolphe Adam and arranged for military wind band by Hyacinthe Klosé, father of the modern clarinet! In spite of this important event, and probably others we don’t know of, the Garde wind band was still unofficial. Finally, Napoleon the Third signed the official decree recognizing the Garde in 1856, eight years after Paulus’s appointment.

This is the very first picture of the Garde wind band. It dates from 1859. There are 53 musicians, including 11 clarinet players and 14 saxhorn players. What about the concerts during those pioneering days? As we do not have any precise account, we can guess Paulus and the Garde performed in Paris for special occasions, for instance at City Hall. Otherwise, between May and September, when the weather was favorable, they probably performed in public gardens. Nothing extraordinary… until the Paris International Exhibition in 1867. The organizing committee of the exhibition decided to set up an international competition for military bands. As the best of European wind orchestras are invited, this was considered a momentous occasion. About 25,000 people hurried to the Industry Palace to be present at the competition. The program included two pieces: Oberon Overture by Weber, and a free choice piece. Under Paulus’s baton, the Garde performed an excerpt from Lohengrin by Wagner, who was at this time, in France, a controversial composer. As a twist of fate – but not only! – Paulus and the Garde were awarded the First Prize ex aequo with Austria and Prussia. Suddenly, they were thrust into the limelight, not only in France but also beyond its borders.

Unfortunately a war between France and Prussia broke out in 1870, and then a very bloody civil war in Paris. Those tragic events hastened the demise of the imperial power, and Napoleon the Third abdicated. The Third Republic was proclaimed.

In spite of those political and diplomatic upheavals, no one had forgotten the 1867 international success. Only six months after the end of the civil war, Paulus and the Garde were invited to perform in London at the brand-new, gigantic and magnificent Albert Hall… but this was only the beginning; the best was ahead!

In order to celebrate the end of the war between France and Germany, a Peace Jubilee was organized in Boston in 1872 as part of the celebration of American Independence. Many military bands from different countries were invited to participate in this international event. France and Germany were to be considered as guests of honor. Paulus and his musicians disembarked in New York after 13 days traveling by sea! They spent more than two months touring through the Northeast of the United States, with 25 very successful concerts, and more applause when the Hail Columbia was performed! In Pittsburgh’s opera house, the audience was so enthusiastic that some people feared that the building would fall down. American critics noted the perfect intonation of the orchestra as well as its beautiful sound due to saxophones and saxhorns. French critics said, obviously, that the French military band level was far superior to the German one.

In France, this was the beginning of the Third Republic. This period was politically unstable. From that time on, the Garde would play a significant part in promoting the democratic ideals of the republican system. Musicians and their bandmaster attended every meaningful event, for instance the very first 14th of July, which is the National Day in France. On that occasion, they officially premiered the Marseillaise as the French national anthem. During that time, the Garde became one of the voices of a nationwide feeling, symbolizing the “collective republican consciousness.”

During that decisive period, the great bandmaster was Gabriel Parès. He was a talented conductor as well as a skillful transcriber. Parès aimed to change the military band into a true wind orchestra, which was a totally new concept at the beginning of the 20th century. Through the impetus given by Gabriel Parès, the Garde’s repertoire took a new turn: from then on, contemporary composers such as Saint-Saëns, César Franck and Massenet were performed.

The Garde Républicaine wind orchestra in concert in Lucerne (Switzerland)

Some members of the Garde became so famous that certain prosperous instrument makers made use of their name and photos as advertisement: the very first steps of French marketing. One example is Henri Paradis (“paradise” in English), principal clarinet, who was said to play his clarinet like “an angel.” This is the Belle-Époque period and parades were very popular with the public. Obviously, the “star” is the drum major, who was said to be the most handsome man in France! Several times a week, there were formal events at the Elysée Palace, at City Hall or at other official buildings, and of course concerts in Paris as well as everywhere in France, even in smaller cities. If there was no suitable hall for performing, the concert took place at the bandstand, should the weather be favorable!

Besides concerts, many records on Pathé or Columbia labels were created. Concerts at the bandstand as well as inexpensive records were the first steps in a true cultural democratization. And, last but not least, musicians and their famous bandmaster, in their prestigious uniforms, symbolized and enhanced ties between the army and the nation. A few years before the First World War, this was a very deep and decisive concern of the Third Republic ideology.

As a cultural ambassador of the French republic, the Garde was involved in this diplomatic undertaking. Each concert in European big cities (London, Rome, Valencia, Geneva) was to be considered a charm offensive towards public opinion. The Garde tours, before and even after the First World War, reflected some of the main trends in French diplomacy.

Under such circumstances, the United States was also a “must-do” tour. The Garde was invited to St. Louis, Missouri, to take part in the 1904 International Exhibition. This event of major importance was organized to celebrate the centenary of the Louisiana Purchase, with 41 concerts within 5 weeks! The last concert was at Carnegie Hall in New York City. A music critic of The Morning Telegraph said, “The clarinet corps is incomparable. The entire woodwind choir has been brought to such a marvelous state of control that M. Parès is able to produce astonishing orchestral effects.”

Fourteen years later, under completely different circumstances, Gabriel Parès made another tour in the United States. This happened between May 1918 and January 1919. As retired conductor of the Garde, he had been then requested to create an orchestra only of wounded and demobilized soldiers. More than 100 concerts were performed in Canada as well as the U.S. This tour was aimed to show brotherhood between allied countries as well as expressing the gratitude of the French people to the American people. This very special tour helped to raise money for the war effort. Leon Leroy, principal clarinetist of the New York Symphony Orchestra, had been principal clarinetist in the Garde before he had been recruited by Walter Damrosch. As a soloist, he performed with this very special French military band conducted by Gabriel Parès.

As previously said, the Garde can be defined at the beginning of the 20th century as being artistic and to some extent diplomatic. That’s why the big American 1953 tour became almost a legend in Garde history.

This transcontinental tour was managed by the famous Columbia Artists Management Company: it encompassed no less than 80 concerts in the U.S. and Canada, which means almost 180,000 listeners, and 24,000 miles by bus! Besides some traditional military pieces, the program included masterpieces from the French as well as German repertoire: Till Eulenspiegel, The Afternoon of a Faun, as well as an excerpt of Weber’s Second Clarinet Concerto, performed by principal clarinetist Henri Druart. Since then, the Garde performed in the U.S., in 1975 and 2001, but now I must briefly introduce the Garde at present time.

Since 1993 the orchestra has had its official title of Orchestre de la Garde Républicaine. It is part of the national Gendarmerie. There is a principal conductor (colonel François Boulanger) and a second conductor (colonel Sébastien Billard). The whole orchestra is made up of 120 musicians, split into two groups: the first group is the string orchestra with 40 musicians, and the second group is the wind band with 80 wind instrumentalists and percussionists. Part of the wind and percussion section joins the string section for the Garde Républicaine symphonic orchestra. Recently a male choir, founded in 1982, has been integrated with the orchestra.

Musicians are recruited by exam. Candidates must perform a mandatory list of pieces. To ensure anonymity during the recruiting competition, they are hidden behind a screen while performing. The selected person, three years later, will be appointed as non-commissioned officer. Grades ranks spread from sergeant to chief warrant officer.

The Garde performs for ceremonial events and state dinners at the Elysée Palace of course, but also exceptional events such as the recent celebration in Paris of the 75th anniversary of D-Day. Besides those formal concerts, the orchestra performs everywhere in France as well as abroad for private or charitable organizations, which means more or less 100 regular concerts a year. As a result of history, the Garde is at the command of the French Republic, but it is also a very popular musical institution in France as well as abroad. Because of the dual characteristic of its unique specificity, the Garde in France can be considered as a living national treasure. 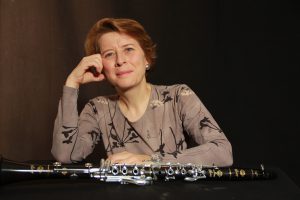 A student of Guy Deplus, Sylvie Hue obtained a first prize in the International Clarinet Competition in Japan. She is presently principal clarinet at the Orchestra of the Republican Guard of Paris, and professor at the Paris-Saclay Conservatoire. Sylvie Hue is a Selmer and Vandoren artist.