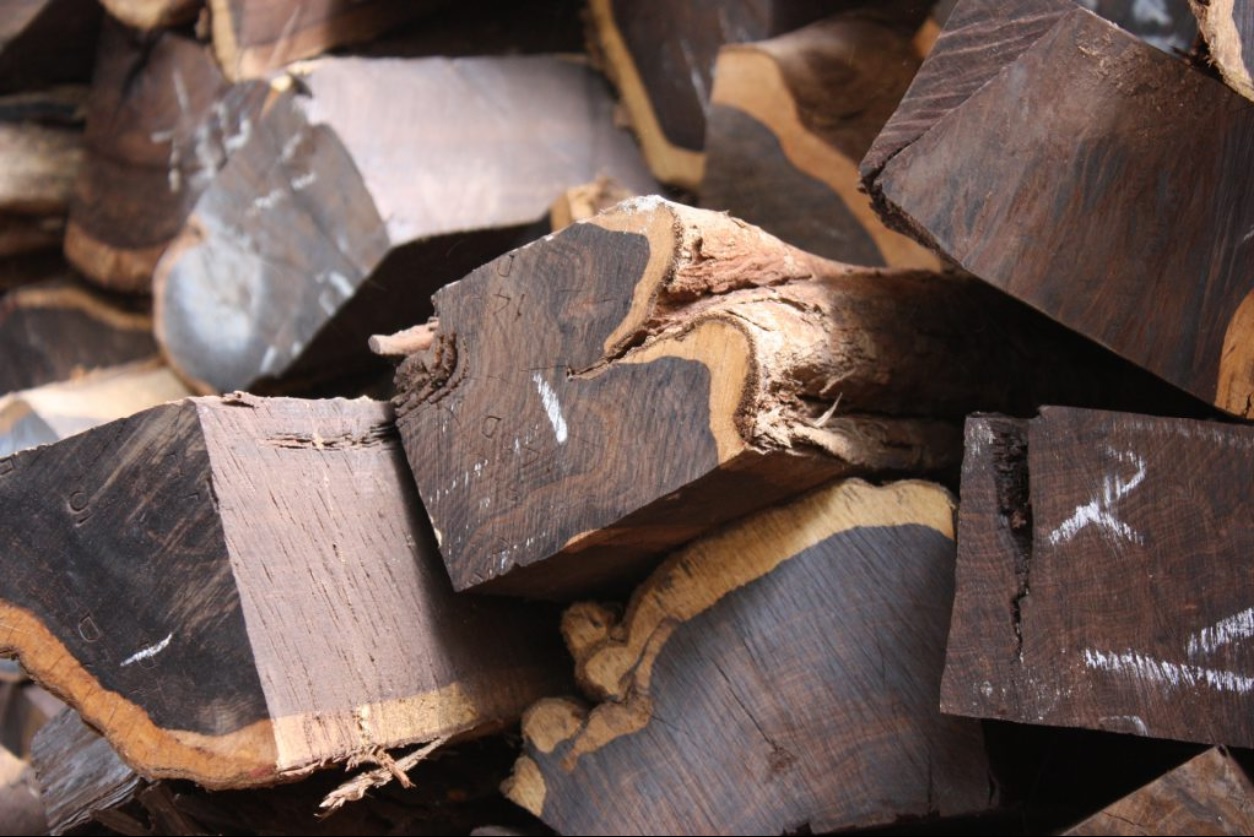 Originally published in The Clarinet 44/4 (September 2017). Printed copies of The Clarinet are available for ICA members. The rough, reddish bark of a Zimbabwean Dalbergia melanoxylon trunk

As of January 2, 2017, the entirety of the Dalbergia genus falls under the international jurisdiction of the Convention on International Trade in Endangered Species of Wild Fauna and Flora (CITES). This regulatory blanket applies to grenadilla (Dalbergia melanoxylon), cocobolo (Dalbergia retusa) and all other species of rosewood used in the production of clarinets (Dalbergia stevensonii, etc.).1 Caught in an unprecedented regulatory crossfire, the collective musical world has responded to these nascent mandates with confusion and conjecture. Regardless, the clarinet community is now subject to a major international agreement, and a reasonable understanding of its effects on travel and trade is paramount for confidently navigating our world of international performing and purchasing.

Quick Tips: What You Need to Know

CITES, first ratified in 1973, is tasked with monitoring the trade and use of wildlife across the globe. Though CITES has no enforcement infrastructure of its own, the treaty organization coordinates with environmental agencies of its 183 member nations (e.g., the United States Fish and Wildlife Service). Perhaps best known for its work against ivory poaching, CITES monitors some 35,000 species – ranging from mollusks to mammals – for irresponsible and unsustainable harvesting. Three levels of regulation exist, designated Appendixes I-III in descending severity. Appendix I contains the most-critically endangered species (giant pandas, lady slipper orchids, jaguars, etc.); Appendix II contains species threatened with endangerment (grenadilla, great white sharks, barrel cacti, etc.) and Appendix III contains non-endangered specimens that individual member countries wish to track. CITES establishes guidelines, but member states are permitted to create additional regulations as they see fit. For example, the European Union requires an import permit for all CITES-protected woods, while the United States does not.

The CITES proposal to place the Dalbergia on Appendix II2 clearly targets rampant poaching in Central and South America for use in Asian furniture manufacturing.3,4 The demands of the Chinese hongmu furniture market are so voracious that traditional hongmu species have earned the sinister title of “blood timbers” on account of their harvest being associated with violent rebel insurgencies.5 From 2011 to 2014, Guatemala alone confiscated nearly 1 million cubic meters of illegally-harvested Dalbergia woods. Of the 38 major shipments, 36 were bound for Asia.6 Some estimates suggest that up to 85 percent of Central American Dalbergia harvesting is illegal.7

Despite being the primary focus of the CITES Dalbergia intervention, Central America is not the only region facing wanton destruction of native Dalbergia species. The sub-Saharan homes of grenadilla (primarily Mozambique and Tanzania)8 are facing hardwood depletion on account of slash-and-burn agricultural expansion.9,10 However, reliable poaching figures in this region are less-readily available due to a lack of border infrastructure. In Africa, as in South America, hardwood poaching has little connection to woodwind building and is primarily attributed to furniture production and, in the case of grenadilla, artistic carvings. For example, Mozambique exports around 720,000 cubic meters of grenadilla a year.11 Of this quantity, only 255 cubic meters are used for instrument building (0.04% of all use)!12 As such, woodwind manufacturing is not considered a causal agent of the genus’ recent depletion. Appendix II, by CITES definition, contains species “not necessarily now threatened with extinction but that may become so unless trade is closely controlled.”13 Appendix II species are not banned or illegal to own and trade. In the interest of protection, however, certain documentation is required for international transactions to ensure that each specimen has been harvested in an ethical, sustainable way. Practically, these regulations take the form of substantial paperwork.

Personal travel with clarinets will not be profoundly impacted by these new regulations. Anyone may travel with up to 10 kilograms (22 pounds) of CITES-monitored wood for personal, noncommercial purposes.14 Be aware that in the eyes of CITES a commercial use of a protected wood involves either buying or selling. Since the ownership of the instrument does not change during performance, performing on a Dalbergia instrument is considered a noncommercial engagement. The weight limit concerns only the wood. The keywork of the instrument, its case, etc., are not factored into this limit. As a rule of thumb, assume 50 percent of a standard 17-keyed soprano clarinet’s total weight (sans mouthpiece) belongs to the wooden body. Though not required by all nations, it is prudent to keep a proof of lawful purchase or similar “declaration of materials” from your instrument’s maker or dealer to avoid unnecessary conflict at customs.

Buying and selling instruments internationally is far more complex than traveling with a personal instrument. Each transaction (classified as re-export from the seller’s side and import from the buyer’s) requires a certificate of CITES compliance, which is generated by the exporting party (seller) and their government. There are no exceptions for old (pre-convention) or used instruments. Selling a single instrument via eBay requires the same attention as three dozen instruments destined for an overseas distributor. Failure to provide the appropriate forms will result in the confiscation of the instrument and additional criminal liabilities depending on nation of origin/destination.

This obligation has two immediate effects on customers. First, firms may charge an “export fee” to cover the CITES application fee and the labor to complete such paperwork. Certain nations permit frequent shippers to apply for expedited, reusable permits, but the process is still intensive and time-consuming. Manufacturers are now encouraged15 or required16 (depending on national regulation) to keep detailed records of their Dalbergia stocks. Second, shipments of Dalbergia instruments will be held in customs substantially longer than their unregulated counterparts. In theory, all instruments containing CITES-regulated material must travel through a CITES-approved port. However, there is a profound discrepancy between the number of active ports and CITES-approved facilities. For example, although the United States has 120 major international seaports and over 90 international airports, it contains a scanty 18 “CITES-approved” facilities.17 The logistical outcome of this discrepancy is not yet clear.

These trade requirements highly discourage shipping instruments internationally for repair. CITES is ambiguous as to whether a musician must first obtain a re-export permit to ship an instrument for repair abroad. It is wise to somehow indicate that your parcel is being shipped for repair versus sale. There is, however, no guarantee that customs agents will honor this assurance.

The relative suddenness and severity of these CITES regulations has already jolted the global musical instrument market. A recent Music Trades analysis concluded that the additional costs and hassle of CITES compliance likely drove a sudden, pronounced dip in rosewood guitar imports earlier this year.18 Though this new layer of paperwork is initially intimidating, the manufacture and sale of our beloved instrument will continue with minimal interruption. The 183 member nations of CITES will meet for their 18th Conference of the Parties in late 2019, where streamlined processes may be adopted for musical use of these precious materials. Though future clarification is needed, these regulations are not the death knell of the wooden clarinet, but simply a growing pain of the international market.

1    The only two species currently used in clarinet production spared from these new regulations are mopane (Colophospermum mopane) and boxwood (Buxus sempervirens).

2    One Dalbergia species (Dalbergia nigra) has been placed under Appendix I. This species is not commonly used in woodwind production.

3    CITES, “CoP17 Proposition 55,” Consideration of Proposals for Amendment of Appendices I and II, October 2016.

5    EIA (Environmental Investigation Agency), “The Hongmu Challenge: A Briefing for the 66th Meeting of the CITES Standing Committee,” January 2016.

James Sullivan is an avid clarinet customizer and researcher at the University of Minnesota’s Laboratory for Neuropsychiatric Imaging. His personal research interests apply the framework of evolutionary psychology to the intrinsic contradictions between prosocial and antisocial tendencies in autonomous societies. When not neck-deep in papers or trying to reinvent the clarinet’s register mechanism, James can be found exploring Minnesota and raising hermit crabs. He can be reached at sullivanclarinet@gmail.com.