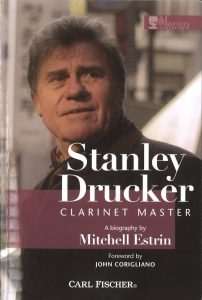 Every aspiring clarinetist knows the name Stanley Drucker. His 61 years of service to the New York Philharmonic, countless premieres, solo performances and pedagogical insight are career highlights. These accomplishments only scratch the surface. Mitchell Estrin’s biography allows us to dive into Drucker’s life from the very beginning.

The foreword by composer John Corigliano aptly provides the framework for the book. Corigliano’s violinist father was in the New York Philharmonic at the start of Drucker’s career and was amazed by the talent of the 19-year-old Drucker. Through John Corigliano’s anecdote about Drucker’s premiere of his clarinet concerto in 1977 we understand the brilliance of Stanley Drucker.

The chapters are generally in chronological order with additional ones addressing musical influences, music directors, recordings and guest artist performances. In his interviews, Drucker was detailed in his descriptions. Estrin is able to describe how Drucker felt emotionally when playing specific excerpts. Drucker’s personal anecdote of how he appreciated his time playing assistant principal and E-flat clarinet resonated with me personally. As an E-flat player you are forced to mature quickly with not only pitch, but also sound and blend. Drucker told Estrin, “Everything you play on the E-flat is always a solo.” He said it was this experience that prepared him to be the principal clarinetist.

In the 12th chapter, “Musical Tools,” the progression of Drucker’s equipment is chronicled from when he was 12 years old to the present. His parents purchased for him a used Buffet clarinet for $125. His first reeds were Vandoren purple box, which are now the blue box traditional cut. He switched to Vandoren V12 reeds in the 1990s. He used the same mouthpiece for 70 years, unheard of for clarinetists. It is interesting how today with so many options, Drucker used the same equipment for most of his career.

Estrin includes many photographs and documents important to Drucker’s career such as his acceptance letter from the Curtis Institute of Music, the manuscript of Bernstein’s Sonata for Clarinet and Piano and concert posters. The appendix includes statistics about Drucker’s career, letters, quotes from musical dignitaries, tributes from students and mentees, a chronological solo recording catalog and a list of publications. This information helps us understand how much Drucker has accomplished.

I am amazed by the amount of information Estrin incorporated into this 216-page book. Drucker always paid attention to details and I fully expected nothing less from this biography. His personality comes through. This is a must-read for anyone who admires excellence in performance and shares an adoration for one of the best clarinetists in the business. Congratulations to Mitchell Estrin for writing a wonderful tribute to one of the world’s greatest performers, Stanley Drucker. 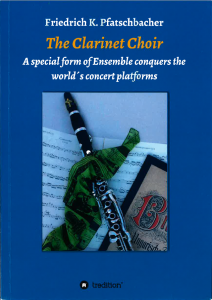 The Clarinet Choir by Austrian clarinetist Friedrich K. Pfatschbacher serves three purposes. It relates the historical roots of the clarinet choir and its development through the 20th and 21st centuries, describes instrumentation options and scoring challenges for clarinet choirs of various size, and provides an extensive bibliography and repertoire list. This combination of topics makes it broadly appealing, both for researchers and for practical application.

The next section details how concert band instrumentation in the 20th century led to interest in and development of the clarinet ensemble. Pfatschbacher chronicles the contributions of important clarinetists including Lucien Cailliet and Don McCathren. He describes the instrumentation of the clarinet choirs of this period. Pfatschbacher includes information about seating options for clarinet ensembles of varying size and a discussion about whether one should consider the clarinet choir a discrete genre.

There are parts of this book, that as an educator, I find both interesting and useful. I will refer to his seating recommendations in the future when working with my university clarinet ensemble. I also feel the author could continue researching and expand his book. For example, he stops talking about the development of the clarinet ensemble in the early 1970s and then picks up again in the early 2000s. I hope in the future he will fill in these gaps and write more about the clarinet choir, particularly the plethora of original works that have been written for the ensemble in the past 30 years. There has not been much scholarship published about the clarinet choir and the writer is passionate about the topic. This book would be helpful to anyone interested in various aspects of the clarinet choir, particularly those interested in its history and development.