The Rise and Fall of the Metal Clarinet: A Brief History
Jul 20

The Rise and Fall of the Metal Clarinet: A Brief History

The Rise and Fall of the Metal Clarinet: A Brief History 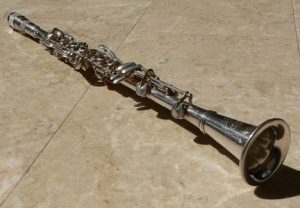 Last summer, I spotted an old brown leather instrument case at a local garage sale. Inside was a metal clarinet. I had seen a metal clarinet once before, at a gypsy jazz gig up in Ann Arbor. I had been enamored by the unique tone it had to offer to the ensemble. With the price tag of only $50, I had to get it! I ended up having the instrument overhauled completely, for about $90. This is what first sparked my interest in this niche topic.

It turned out that the clarinet I had found was a Holton “Collegiate”  from 1952. While it was far from a rare or high-quality instrument, I was thrilled to have a new type of woodwind in my collection, especially one with such an interesting timbre: I had to learn more.

In this article, I’ll be sharing what I have learned thus far about the metal clarinet, as well as how this once-popular instrument fell from its throne.

Side note: The plastic clarinet was invented around 1948, over 50 years after the first metal clarinet. And while we might not make metal sopranos anymore, it is interesting to note that the contrabass clarinet is still made out of metal!  This is because Grenadilla trees aren’t big enough to accommodate the sheer size of these instruments.

The first metal clarinets were all double-walled. They had a lovely tone. Many subsequent models, such as those made in Europe, only had a single wall, which caused a host of problems, including an inferior tone, and squirrelly intonation. 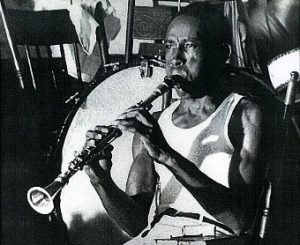 I have to admit that I had to chuckle when I saw a forum on Sax on the Web titled ‘Old, Loud, Jazzy Clarinets’. That’s exactly what they are, and I love them!

American clarinetist George Lewis proudly marched his metal clarinet into the world of New Orleans Jazz. He played on a Pedler clarinet. His “Burgundy Street Blues” was recorded on said clarinet. You can listen to it here:

Benny Goodman also played on a metal clarinet at several points in his career.

As I mentioned in the introduction, you can still see the occasional trad jazz or gypsy jazz group featuring a metal clarinetist. If you see a local gig coming up, I’d highly recommend you check it out! Metal clarinets blend extremely well with saxophones in the context of jazz. It is truly a treat.

Speaking of marching, the metal clarinet started to take off like wildfire when the instrument began being used in marching bands because of its sturdiness of built.  The metal clarinet’s popularity spread much faster with marching bands than it did in jazz. Companies began making student-model clarinets by the thousands. Unfortunately, this production craze is what started the beginning of the end, due to the instruments quality getting worse and worse.

Many metal clarinets were made of nickel silver, brass, or were silver plated. A small percentage of them were made of sterling silver (Jerry Schurr). Solid silver clarinets are said to have a more sonorous or vocal quality to them, making them most ideal for indoor concert settings.

It wouldn’t be an article about the metal clarinet if we didn’t mention the CLARI-MET. The CLARI-MET is a famous double-walled instrument from Penzel-Meuller. Because it was double-walled, it was known for sounding lush, and much better than the cheap single-walled.

Holton made many metal clarinets. The metal clarinet I got, which is from 1952, is a student model clarinet. Admittedly, it’s not the best, and it was one of those mass-produced models. That being said, it was worth overhauling it just for fun. Student-grade instruments are infamous for being difficult to keep in tune or keep a consistent tone on. This is partially due to the fact that these are single-walled instruments.

Pros and Cons of the Metal Clarinet

The Downfall of the Metal Clarinet

Many metal clarinets were mass-produced with little attention to detail, leading to the instrument’s demise. They quickly became known for being out of tune, and “The Clairon-Métallique was nothing but a brass clarinet, in every way similar to wooden clarinets. The only advantage that one believed to meet in this innovation was the solidity of the matter; but, on the other hand, the sounds were less pleasant and less velvety in the brass clarinet than in the ordinary clarinet. »

According to the same page, clarinets were reportedly being removed from symphonies for playing the instrument!

In 1931, the Boston orchestra did not renew the contract of clarinetist Gaston Hamelin, because he played a metal Selmer (https://fr.wikipedia.org/wiki/Gaston_Hamelin ). As a result, the clarinet was removed from the Selmer company catalog because it hurt the brand name. Metal clarinets were made primarily during the war. After the war ended, plastic clarinets were the new thing, and we never looked back. But should we have? The metal clarinet offered a unique sound to jazz.

But the world war’s not the only reason for the downfall of this shiny woodwind. Metal clarinets started to get a bad reputation when cheaper, single-walled instruments started to be made by the thousands. Quality went out the window, along with the instrument’s lustrous tone. The instrument soon had a reputation even worse than that of the metal marching piccolo.

While the metal clarinet may not be everyone’s cup of tea, it still holds an important place in music history. 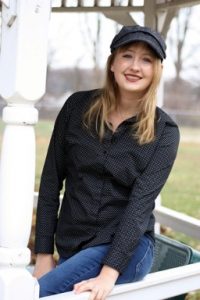 Aleah Fitzwater is a music educator, private music teacher, and visual artist. In her spare time, she likes to arrange pop-punk songs for flute choir and cook French cuisine. You can find more of Aleah’s writing at the music-digitizing company ScanScore’s site.