Originally published in The Clarinet 48/4 (September 2021). Printed copies of The Clarinet are available for ICA members.

The 25th Anniversary of the Associação Brasileira de Clarinetistas 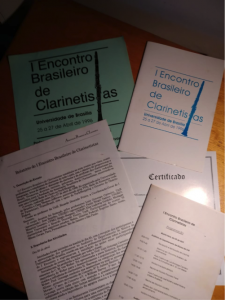 The Associação Brasileira de Clarinetistas (Brazilian Clarinet Association) was created in 1996, and it completed its 25th anniversary last April. The ABCL organized an online meeting to celebrate the date, but it was not possible to have the celebration we had originally planned because of the pandemic. This article brings an historical view of the original event, based on documents from the period and influenced by my memories of creating the Brazilian Clarinet Association. It was a small clarinet event that changed the way clarinet players related to each other; since then, the clarinet community has grown larger and stronger in Brazil.

In 1992, I was accepted into the master’s degree program in clarinet at Michigan State University, to study with professor Elsa Verdehr. During my clarinet lessons, Dr. Verdehr would introduce me to her complete collection of issues of The Clarinet. After my lessons, I borrowed some old magazines to find out more about the ICA. I learned that Verdehr had participated in the National Clarinet Clinic, organized by Ralph Strouf, during the 1960s. She later attended the early ICA events and I was fascinated by her narrative. When I returned to Brazil in 1995 to take up the position of clarinet professor at the University of Brasília (UnB) I glimpsed the possibility of making a dream come true and holding a clarinet event. During the 1990s, flute players had already organized the Brazilian Flute Association (ABRAF), in 1994, followed by the Brazilian Trombone Association, in 1995. Clarinet players were the next group to organize their own event and to create a national organization.

In order to be true to the historical facts, I present excerpts from the original report written in 1996. It was the main document that described what happened during those three days. 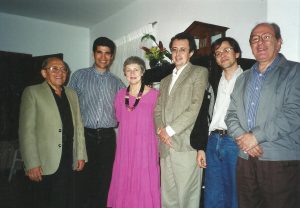 1  Event Description – The Primeiro Encontro Brasileiro de Clarinetistas (First Brazilian Clarinet Meeting) was an event that aimed to bring together clarinet professionals and students from all over Brazil, to provide integration, exchange of ideas and discussions about the clarinet and the clarinet profession in Brazil. The event consisted of recitals, lectures, masterclasses, workshops and the foundation of the Associação Brasileira de Clarinetistas (Brazilian Clarinet Association). The final concert was a Roda da Choro – a traditional popular music jam with many clarinet players – held at the main Shopping Mall in Brasilia, the ParkShopping. 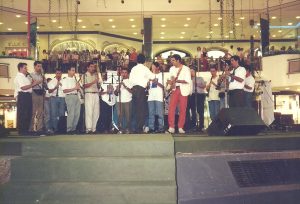 Roda de Choro at ParkShopping in 1996

3  Conclusion – The Primeiro Encontro Brasileiro de Clarinetistas, for the first time, brought together clarinetists in a significant event at the national level. Representatives from all regions were present, which allowed us to have a broad view of the clarinet situation in Brazil and observe different approaches to playing the instrument. Participants attended lectures and recitals, and were also able to exchange information among themselves. The foundation of the Brazilian Clarinet Association was important because it represented the realization of a longtime goal. The ABCL will be able to help the development of clarinet players through access to information, support in obtaining musical instruments and accessories, promotion of events and the organization of national and regional events. Teachers’ recitals demonstrated the high musical and technical level of Brazilian clarinetists in an international context. The quality of the performances impressed everyone due to the musicality, skill and personality of each player. Certainly the participants returned to their states certain that there was a Brazilian way of playing the clarinet. The rich repertoire could please all kinds of musical interests, in both classical and popular music. The Roda de Choro at ParkShopping and Clube do Choro showed that the choro is an important musical style for clarinet players, in which it is possible to develop musical spontaneity on stage as well as to perfect technical and improvisational skills. Among the participants, the resurgence of interest in choro was an important topic for players and also for composers.

The ABCL was renewed in 2017, with the election of a new board that carried out the work of organizing a new structure with Sergio Albach as president. During the pandemic period, ABCL performed 51 broadcasts on the YouTube channel of ABCLives – interviews with clarinet players, with the participation of a diverse group of clarinetists representing the different ways of playing and conceiving the performance of the clarinet in Brazil. The ABCL has the great merit of keeping itself in constant renewal, as a pole of attraction for clarinetists from all over the country. In this way, it becomes possible to promote plurality and stimulate the richness of possibilities in the performance of the clarinet by valuing the agent who performs the musical actions: the Brazilian clarinetist.

Ricardo Dourado Freire is clarinet professor at Universidade de Brasília, in Brazil, since 1995. Dr. Freire has written over 120 articles in the fields of clarinet performance, music cognition and music education. Over the last 25 years, he has taken part in major clarinet events in Latin America including Brazil, Colombia, Mexico, Paraguay, Peru and Venezuela.