by Luca Saracca, with translation by Barbara Haney 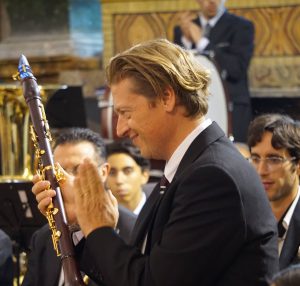 LS: I’d like to end this interview with some breaking news that I need you to confirm, and that is that you were just awarded the National Cultural Prize of Montefeltro.
MM: Yes, that’s true – the full name is National Cultural Prize “Frontino Montefeltro,” 38th Edition 2019, in the “Personalities” category. The award ceremony will be on Sunday, October 6, at 10 a.m. at the Monumental Complex of Montefiorentino in Frontino, a small town in the province of Pesaro and Urbino.
LS: Congratulations on the award. Thanks for the opportunity to spend the morning together, not just for the interview, but for the chance to return to your beautiful city and to admire the panorama from this unique spot. I’m sure I’ll be seeing you again in the near future, though with all your upcoming engagements that may not be until ClarinetFest® 2020 in Reno, where we’ll hope you’ll have some world premieres.
MM: It’s possible, but still too early to say for sure. As always, though, it would be a pleasure to participate in ClarinetFest®. For now, thank you, and I send greetings from Urbino to all my friends, colleagues and readers of The Clarinet.
* * * * *
Find more information about Michele Mangani on Facebook, at http://michelemangani.it or by email at [email protected]. 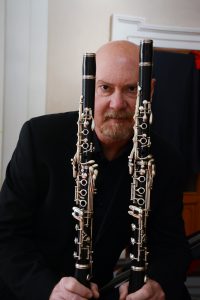 Luca Saracca is chair of international relations for the ICA and professor of clarinet at the Conservatory of Music “Francesco Morlacchi” in Perugia, Italy. He was born in Perugia where he studied clarinet at the conservatory under the guidance of Ciro Scarponi, and later studied at the Salzburg Mozarteum Akademie with Alfred Prinz (Vienna Philarmonic). He has performed on clarinet and basset horn throughout Europe and the U.S. with many chamber music ensembles and orchestras including the Orchestra Filarmonica Marchigiana and Namaste Clarinet Quartet. Saracca plays Herbert Wurlitzer Reform Boehm clarinets.