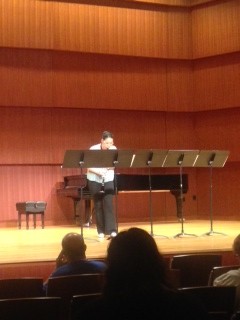 On Saturday morning at 8:30 a.m., the opening recital, “Clarinet Alone,” explored repertoire for the unaccompanied clarinet. The recital took place in Swarthout Recital Hall and featured six performers presenting pieces from the 20th and 21st centuries.

Jonathan Guist opened the program with an assured performance of Samuel Robles‘ mysterious Fantasia for Clarinet in A. Amanda McCandless then took the stage to perform Theresa Martin’s Light and Shadows. McCandless, an avid performer and researcher of unaccompanied clarinet music by women, gave an excellent introduction to the piece and acknowledged Martin’s presence in the audience that morning. Martin’s popularity has grown, as her clarinet solo and chamber music has been more frequently performed in the past few years. McCandless called Martin’s writing “challenging yet accessible,” and cited her repertoire as a viable starting point for students or others as they start to explore the realm of unaccompanied clarinet literature. Light and Shadows proved to contain Martin’s characteristic relentless energy and intensity.

Parfums d’orient by Jerome Naulais was next on the program, performed by Timothy Phillips. This work was a soulful compilation of ideas with a somewhat Middle Eastern flavor. Phillips executed the piece with beautiful phrasing and wonderfully well-placed resting points for the music to breathe. Cecilia Kang then tackled Michel Gonneville’s wild, ecstatic L’oiseau du cri á la quete des ailes. Though the piece nearly screams in exuberance by the end, it starts with perhaps the most haunting and still line from the unaccompanied clarinet canon: the opening from Messiaen’s Abyss of the Birds. The title roughly translates to “the bird called during his flight” and the characters within the work certainly depict such a scene. The composition is reminiscent of other bird-themed modern clarinet repertoire – Joan Tower’s Wings comes to mind – but has its own unique flair.

Katrina Phillips spoke about her inspirations when studying Through the Clouds by Gregory J. Jackson before performing the work. She noted the childlike perspective she gained through raising her own children provided imagery for the dreamy and curious quality of the piece. Virginia Figueiredo closed the program with two works by Portuguese composers: Simmetria by Maria de Lourdes Martins and Clair–et–net by Clotilde Rosa. These powerful pieces explored the full expressive range of the instrument and beyond, employing multiphonics, growling, microtones, and flutter tonguing. Figueiredo spoke about the significance of the work of these two composers in using their music to voice against the Portuguese dictatorship.