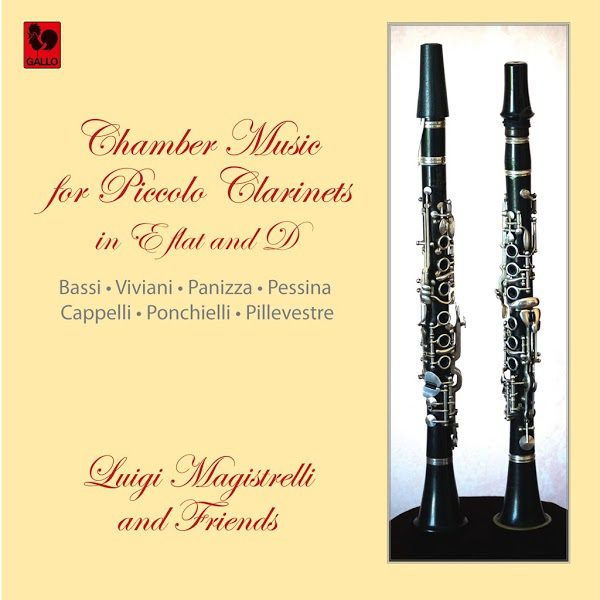 Italian clarinetist Luigi Magistrelli is among the most recorded clarinetists of our time, with over 55 recordings on 18 labels representing every imaginable medium. He currently serves as professor of clarinet at the Conservatory of Milan and maintains an active performance and teaching schedule of international scope. Of special note is his personal collection of over 260 clarinets, which range from the chalumeau to modern Boehm and Deutsche System instruments. Magistrelli’s scholarly research centers on obscure literature for clarinet, clarinet and piano and various chamber ensembles with a special focus on Italian 19th century literature. His exhaustive research efforts have resulted in critical scores of many such works, published by Eufonia, Musica Rara and Accademia Italiana del Clarinetto, among others. His recording activities and these editions disseminate his findings internationally. Detailed information about his recording activities, instrument collection and publications is available on his professional website: www.luigimagistrelli.it. Chamber Music for Piccolo Clarinets in E-flat and D, Gallo CD-1487 was recorded between 2002 and 2015. This disc features Luigi Magistrelli on the title instruments, along with a variety of collaborators: clarinetist Laura Magistrelli; clarinetist and pianist Sergio Del Mastro; piccoloists Elena Cecconi and Flavio Alziati; flutist Marco Zoni; pianists Claudio Bracco, Marinia Degl’Innocenti, Riccardo Caramella and Vsevolod Dvorkin; and oboist Gianfranco Bortolato. Solo and chamber music recordings featuring high clarinets are fairly rare, although a few such notable recordings have emerged in recent years. Magistrelli’s chosen program, exclusively consisting of 19th century Italian literature, includes two standards: Ponchielli’s Quartet in E-flat Major, Op. 110, for flute, oboe, E-flat clarinet, B-flat clarinet and piano (in fact a quintet), and Luigi Bassi’s Gran Duetto Concertato on Bellini’s “Sonnambula” for E-flat clarinet, B-flat clarinet and piano. All other works are world premiere recordings. Particularly unique are works featuring piccolo and E-flat or D clarinet: Giacomo Panizza’s Gli Innamorati (The Lovers) and Giuseppe Pessina’s Gli Usignoli (The Nightingales). As one might expect with such a combination of instruments and virtuosic literature, there are occasional intonation discrepancies. Beyond those two tracks, excellent intonation, idiomatic phrasing, musical conviction and beautiful sonorities are enjoyed throughout this disc. Those interested in E-flat clarinet solo recital literature with piano will be particularly interested in Luigi-Maria Viviani’s Solo from the ballet “Il Fausto” and Giuseppe Capelli’s Fantasy on “I Due Foscardi,” after Verdi. The closing track, Jules Pillevestre’s Les Anches rebelles, is a charming programming alternative for the same instrumentation as Bassi’s aforementioned staple. Unknown Arias of Mercadante – Rossini – Donizetti, Gallo CD-1499, also includes some standard literature and a number of world premiere recordings. Magistrelli delivers convincing and enjoyable performances of Gioachino Rossini’s revered Introduction, Theme and Variations and the less frequently performed Variations in C, initially designated for oboe, both with piano reductions of the orchestration. Other instrumental features on this recording include the world premiere recording of Saverio Mercadante’s Potpourri for the unique instrumentation of flute, oboe, clarinet, basset horn (originally for English horn) and piano (originally for orchestra) and an arrangement of Rossini’s mezzo aria Se il vuol la Mulinara for clarinet and piano. Especially intriguing, however, are the arrangements by Nico Bertelli of popular opera arias by Rossini, Donizetti, and Mercadante for tenor or bass, clarinet obbligato and piano. These enhance the limited available repertoire and are published by Nico Bertelli Edition. Pianist Marina Degl’Innocenti, tenor Filippo Pina Castiglioni, bass Riccardo Ristori, oboist Guido Toshi and flutist Diego Collino collaborate with Magistrelli in an exquisite manner for this fine disc. Unknown Classical Clarinet Sonatas, Gallo CD-1476, presents sonatas by Xavier Lefèvre, Samuel Friedrich Heine, François Baissière, Paul Friedrich Struck and Carl Arnold. Magistrelli collaborates with pianist Chiara Nicola and cellist Elisabetta Soresina for this recording. Lefèvre’s Sonata No. 3, Op. 12, is perhaps most familiar to clarinetists because of Georgina Dobrée’s continuo realization for piano. However, here the continuo is performed with cello alone, which provides a unique and convincing rendition of this early repertoire for our instrument. Baissière’s Sonata, Op. 3, No. 1, also adds cello to the continuo texture, but with piano in this instance. Each work found on this recording demonstrates an exceptional mastery of the classical style. Magistrelli performs on instruments previously owned by the late clarinetist Dieter Kloecker built by L. Warschewski, c. 1920. An intellectual, artistic and inspired approach to these works is evident. These interpretations revel in the charm, simplicity and effervescence of this period and are a joyful experience. The clarity of Magistrelli’s articulation is particularly notable and enhances the overall effect of this repertoire.

Magistrelli’s three recent releases on the Gallo label disseminate a remarkable variety of obscure literature, both original and transcribed, with much of it recorded for the first time. Beyond increasing the awareness of this unusual repertoire, this is inspiring clarinet performance with musical conviction. Magistrelli has an especially notable command of the extended clarinet family, whether historic or modern. I hope you will pursue these fine discs!