The History of the Clarinet
May 05

The History of the Clarinet

The History of the Clarinet

In the world of classical music, the clarinet is a relatively new instrument. In this article, I will guide you through some of the most notable points in the timeline of the progression of the clarinet. 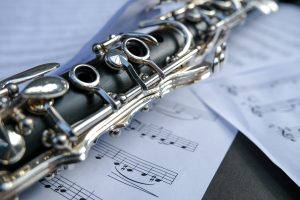 The Ancestors of The Clarinet

Like many other woodwind instruments, the origins of the clarinet are a bit blurry. Some say that the original ancestor of the clarinet was the hornpipe, a woodwind with a reed that was traditionally made from an animal’s horn (hence the name!).

The alboka (alboque) is a type of hornpipe from Spain. Unlike the clarinet, it actually had two pipes. Hornpipes and alboka-like instruments have been found all across the world, from Africa to Europe, to the Middle East.

Today, Chalumeau is a term that we use for the clarinet’s low register. However, it was originally an instrument.  Like the clarinet, the chalumeau had a single reed and a cylindrical bore.

The instrument looked quite similar to a wooden recorder. It had eight open holes with no keys. You can hear this predecessor to the clarinet  in this video:

The Chalumeau shared more with the recorder than just a similarity in appearance. Chalumeaus, like baroque recorders, were also played in consorts. They came in different pitches, including soprano, alto, tenor, and bass. If you have heard of the Baroque clarinet, this is actually the same instrument as the chalumeau.

Inventor of the Clarinet and Chalumeau

Both the chalumeau and the clarinet were first invented by Johann Denner. Denner was an instrument maker from Nurnberg, Germany. It all began in the late 1600s when Denner had the idea to create a pipe (French: chalumeau). However, after noticing how short the range of the instrument was, Denner decided to make the chalumeau longer. This allowed musicians to reach higher notes by playing partials, thus extending the range

The first record of the chalumeau is from the year 1687 when the duke of Romhild-Sachsen requested one be made for him for playing it at court. The Habsburg court was also quite fond of the little instrument. The Chalumeau was found in concerts in Vienna, Hamburg, Prague, and Hanover. Many operas from this time period had chalumeau in them, including the Viennese opera Chilonida. Despite their popularity, there are less than a dozen original chalumeau left today.

They eventually found that the chalumeau had one big drawback: Its range only could reach an octave and a half, even with the longer pipe. The first official clarinet was made around the year 1690 when the chalumeau had a register key and barrel added to it.

The First Music Published for Clarinet

Chalumeau music was available long before clarinet music. The first duet for the instrument was published in 1706- After the first clarinet had already been made. Chalumeau duets were quite popular in Amsterdam, and surrounding Western European countries. It wasn’t until many years later, that a duet for the Clarinet was first written.

The first time the clarinet was used in an orchestral setting was in Vivaldi’s “Juditha Triumphans”, which was written in around 1715 or 1716 (Niu.edu).

Despite the invention of the clarinet in the early 1700s, the chalumeau reigned supreme in orchestras and small settings alike, until about 1740. From 1740 to 1780, the clarinet began to gain more traction. By the late 1700s, composers were (finally) regularly writing clarinet parts into their pieces.

Where the Clarinet Got Its Name 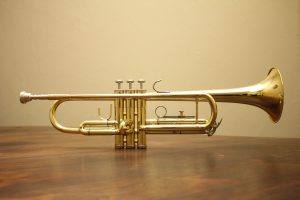 The clarinet got its name because musicians noticed that it sounded like a trumpet. It is similar to the word clarinetto, which means “little trumpet” (Bellis). Similarly, the word clarino means trumpet.

The development of the clarinet didn’t stop there. For the first half of the 1800s, instrument makers continued to make adjustments to the clarinet. One major problem that clarinetists faced in their earlier iterations of the instrument was that it didn’t have a very large sound.

This was remedied by making both the bore wider, and the mouthpiece bigger. (https://www.britannica.com/art/clarinet )

By the year 1850, the clarinet was pretty much what it is today. In 1950, the SK mechanism was added, which helped make the interval of a 12th become more in tune.

From hornpipes to chalumeau consorts, it’s become apparent that the clarinet has come a long way from its ancestors. 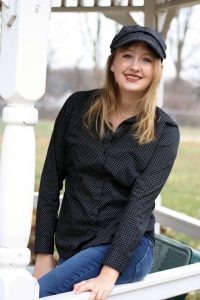 Aleah Fitzwater is a music educator, private music teacher, and visual artist. In her spare time, she likes to arrange pop-punk songs for flute choir and cook French cuisine. You can find more of Aleah’s writing at ScanScore and on her website, Aleah Fitzwater.