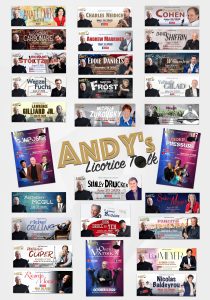 When concert halls, theatres, and music venues shut down early last year, musicians all over the world began scrambling to find ways to continue creative output, connect with audiences, and, most of all, connect with each other. Andrew Simon, principal clarinetist of the Hong Kong Philharmonic Orchestra, was no exception. From this global tragedy, Andy’s Licorice Talk was born. With his warm personality and genuine enthusiasm for clarinet, Andrew reached out to some of the most established clarinetists from all over the world with the request to interview them on Facebook live (later uploading the videos to YouTube). With his brilliant “tech and social media guy” Lorenzo Antonio Iosco, bass clarinetist of the Hong Kong Philharmonic, by his side, the resulting video series is a delight and an important contribution to documenting living history in the field of clarinet.

For me, the word that sums up the series is “charming.” Without Andrew’s insatiable curiosity and excitement, this series could have been just another collection of long interviews. Each episode is a tapestry of lovely conversation, honest opinions, and spontaneous, often hilarious, moments of fun. Andy’s captivating personality brings out the best in his guests and humanizes them in ways I had not experienced before. We meet Yehuda Gilad’s dog and learn of his illness and recovery from COVID-19, explore Eddie Daniels’s personal journey with performance anxiety, and giggle along with Michele Zukovsky as she recounts working with her father. We learn that Ricardo Morales believes he is a shy person when compared to his siblings, and that John Yeh won the Frank Sinatra Music Award (picture provided of Frank Sinatra delivering it) as a pre-med student while at UCLA. In response to the deaths of Joseph Rabbai and Jim Ognibene, Mr. Simon collected recorded memories and tributes from clarinetists in a heartfelt memorial. In the new world of video conference calls, we get a peek into the inner world of some of the greatest performers and musicians in the comfort of their own homes. The result is beautiful, authentic moments of humanity.

This video series also brings several people into the fold who are not directly working as clarinetists. These episodes are some of my favorites because I learned so much about the many different ways to be a musician. The interview with actor Lawrence Gilliard Jr was deeply honest about what it means to be an artist. Gilliard eloquently regales stories about his journey to the realization that clarinet was no longer what he wanted out of his career in his last year studying at Juilliard. It was also during this interview that I noticed how often Mr. Simon asks difficult questions about inclusion and belonging in music. The interview with Osmo Vänskä offers perspective of both a clarinetist and conductor in respect to musicality, what is important in auditions and the interpersonal dynamics of working in a top-tier orchestra. His closing advice of “always listen” is relevant to all clarinetists as well as the entire music community.

These interviews are not necessarily designed to be heard in order, which makes them accessible but overwhelming to those who might have trouble deciding where to start. My first episode was with Nicolas Baldeyrou, and it immediately drew me in. Baldeyrou’s personality was kind and relaxed, and the episode highlighted the tone of Mr. Simon’s interview style. There are endless ways to dive into this series depending on the listener’s interests. The interview with Stanley Drucker is particularly charming. He responds to both hilarious and legendary anecdotes from his life and describes the fascinating history that he lived. Anthony McGill’s discussion of racial justice and the difficulty of developing empathy through screens is deepened by Mr. Simon’s carefully navigated questions about race and racial inequality. Sabine Meyer’s interview was a very candid talk about teaching, teachers, and what she finds important in clarinet playing. Meyer even discusses how she balanced having young children and a full schedule of concert appearances. Each episode oscillates easily between silly moments and moments of a profound and serious tone. I suggest choosing an interview of someone unfamiliar, but any episode is a perfect starting point.

With everything that makes Andy’s Licorice Talk charming, there is absolutely something for everyone in these interviews. Andrew has a knack for making connections between people and events, and making it extremely interesting for those who enjoy clarinet lineage and history. There are also countless anecdotes for those who enjoy learning what is happening behind the scenes. This series offers advice on clarinet, music and life with a diverse group of guests that champion both jazz and classical clarinet. These interviews are perfect for clarinetists at any level. They are both inspiring and informative, and the language is not always technical making these accessible to beginners or even listeners who are not clarinetists.

For me, this is more than a review; it is a letter of thanks. Honestly, I’ve never been one to have patience to listen to clarinet interviews longer than 20 minutes, but Andy’s Licorice Talk resonated with me even when interviews lasted hours. I found myself laughing out loud, taking notes on how I can apply things to my own playing and teaching, and sitting in somber silence after more serious moments. This series reignited my excitement for all things clarinet. I believe that Andy’s Licorice Talk can be important to each of us as we navigate being musicians and music lovers in the pandemic. But this is also a timeless contribution to the clarinet community that will remain relevant for as long as there are clarinetists. Andrew Simon is able to create such a magical atmosphere with each guest and his “gift of gab” serves him well as he coaxes the best stories and advice out of each one. IN the words of the great Anthony McGill, “You’re really good at this Andy!” And I couldn’t agree more! 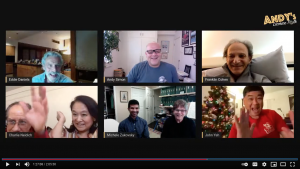 Dr. Sarah Manasreh is currently the Assistant Professor of Clarinet and Music Theory at the University of Wisconsin – Stevens Point.