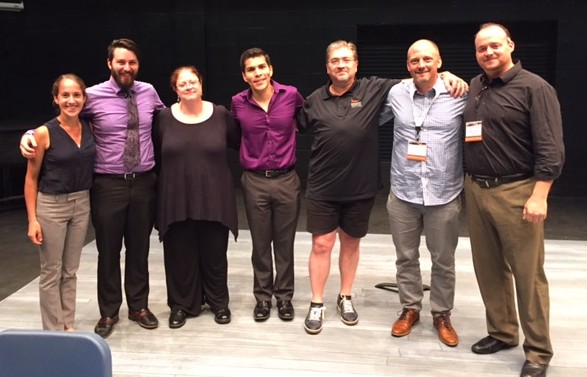 Report by Amanda McCandless with assistance from Robyn Jones, coordinator On Friday, August 5, 2016 at 9:00 a.m., the International Clarinet Association held its Orchestral Audition Competition in Inge Memorial Hall on the campus of the University of Kansas. Eleven people submitted recordings for the preliminary round, which was judged by Steve Cohen (Northwestern University), Anthony Costa (Penn State University), and Bil Jackson (Vanderbilt University). The finalists who were selected to compete at ClarinetFest® were Christine Bellomy, Matthew Casazza, Aileen Razey and Ivan Hernandez. The judges for the final round were Jonathan Gunn, Jonathan Holden and Bil Jackson.

The contestants performed excerpts from the following works (in this order):

Mozart Concerto
Respighi Pines of Rome
Kodaly Dances of Galanta
Ravel Daphnis et Chloe, Suite 2
Rimsky Korsakov Capriccio Espagnol
Brahms Symphony No. 3
Beethoven Symphony No. 6
Mendelssohn “Scherzo” from A Midsummer Night’s Dream
All four contestants delivered nearly flawless performances. Christine Bellomy’s interpretation of the cadenza of Dances of Galanta was powerfully executed and her sound in the Mozart was lovely and even. Matthew Casazza performed Capriccio Espagnol with the fire and passion necessary to interpret the work and overall performed all works with fervor. Aileen Razey has a truly beautiful sound which she displayed with an emotionally colored performance of the third movement of Pines of Rome. She also performed the opening of Daphnis with an ease rarely heard. Ivan Hernandez had technical and expressive control of each work he played. He brought out the accents necessary for the Hungarian character of Dances of Galanta and played an effortless Mendelssohn Scherzo. Every clarinetist should envy the flawless ease with which he plays the end of Daphnis. It was a thrill to hear these up-and-coming performers. Orchestral Competition finalists received feedback from the judges in a Q&A session after the final round.

Amanda McCandless is Associate Professor of Clarinet at the University of Northern Iowa. Dr. McCandless is a former student of Elsa Ludewig-Verdehr.