The Sonic Kaleidoscope concert took place on Thursday at 1:30 p.m. and featured eight works composed between 1975 and 2015. This eclectic program filled the stage with various electronics and percussion instruments. 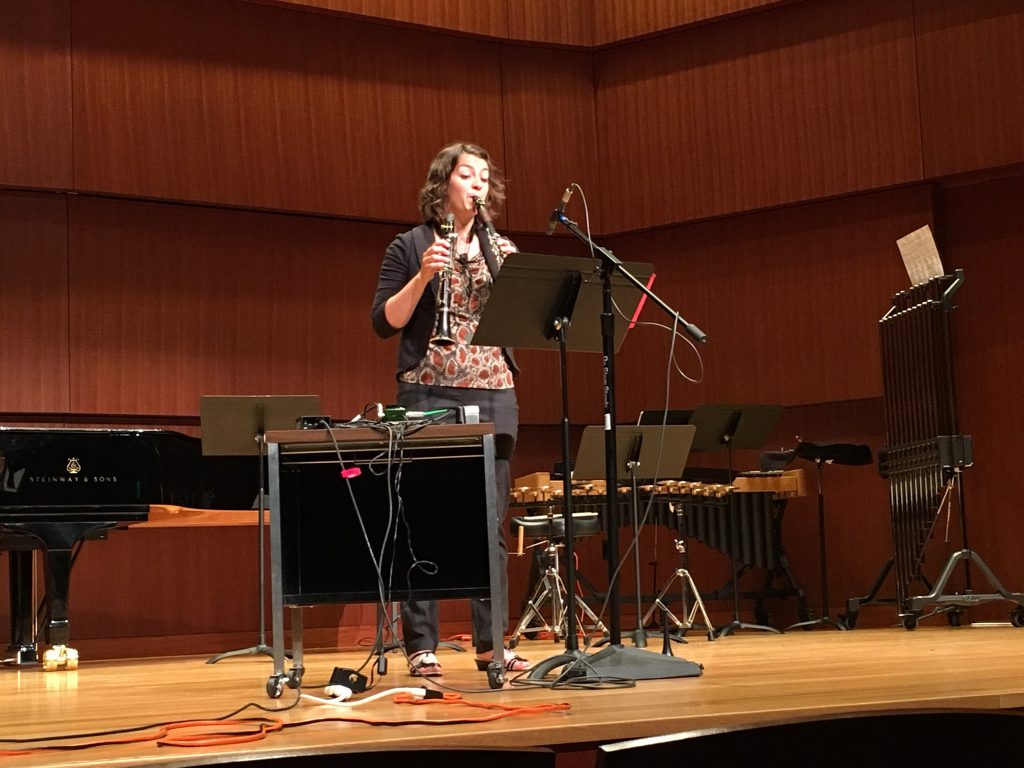 Rachel Yoder performed William O. Smith’s Solo for Clarinet with Delay System. The piece is made up of five movements and uses a delay pedal as well as extended techniques to explore the versatility of the instrument and performer. Yoder was humming, shouting, chanting, and playing the upper and lower joints of the clarinet separately.

Next, Tony Costa performed Three Things You Didn’t Know About the Dark. This 2015 composition is for clarinet and prepared audio and was written for Costa by his colleague Paul Barsom. Costa arranged his stands in three areas around the 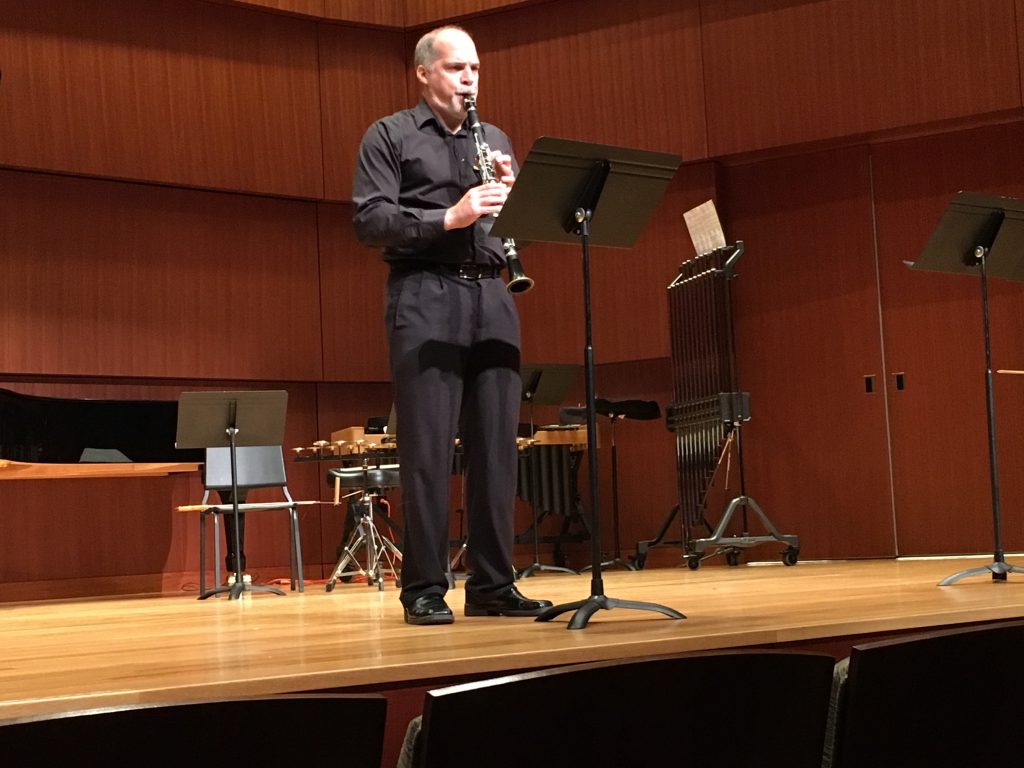 stage and walked between them for each movement. As he transitioned between movements, the score included more pitch bending and vibrato and concluded with a very active third movement. The piece employs extended technique and highlights the full dynamic range of the clarinet. Costa’s performance was sponsored by Penn State University. 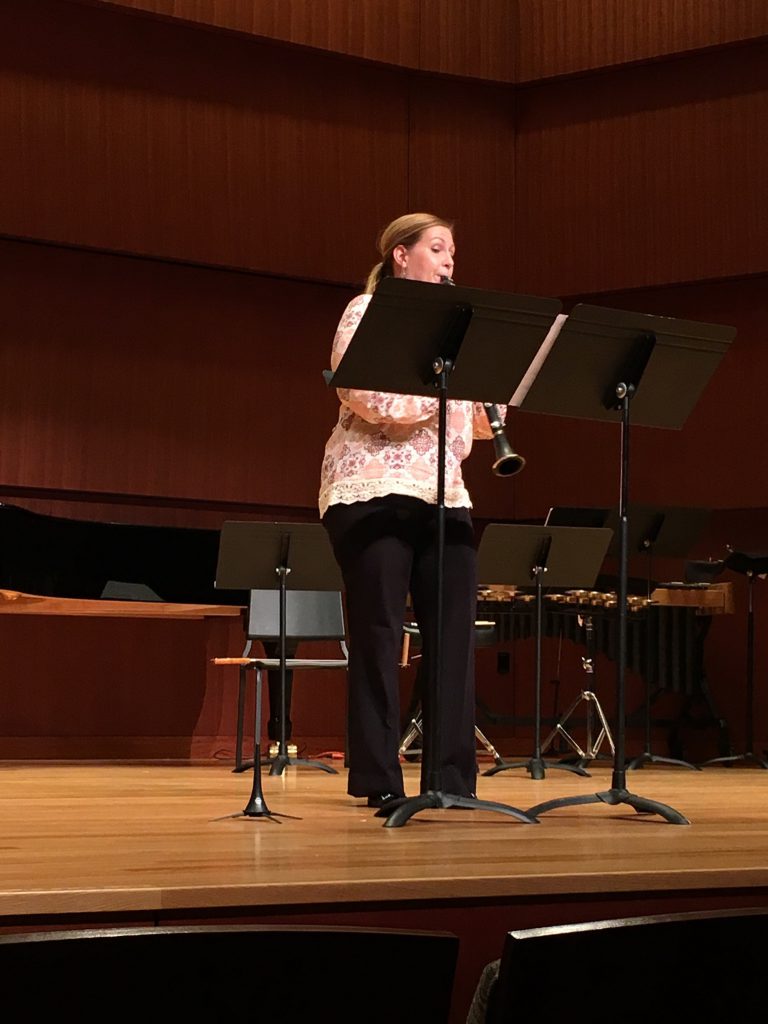 Dawn McConkie was featured on two pieces: Chroma V for Clarinet (1975) by Joseph Ott and Tape and Soundprints Variations for B-flat Clarinet and Koto by Neil McKay. McConkie currently teaches at Emporia State University where Joseph Ott was a composer in residence. This piece was the oldest composition on the program and provided an interesting contrast from early tape music to present compositions. Soundprints Variations by Neil McKay is a theme and variations for clarinet and vibraphone. Tracy Freeze, professor of percussion studies at Emporia State, performed with McConkie. The clarinet employed pitch bending, glissandi, and playing on individual joints of the instrument, and the vibraphone explored multiple timbres. 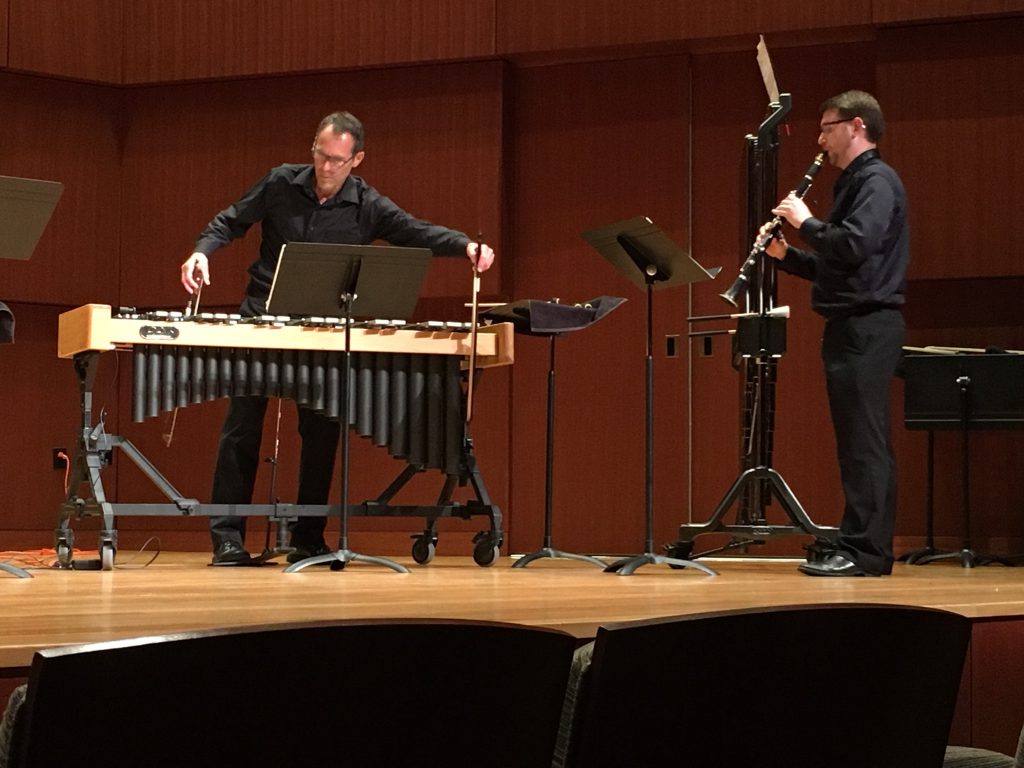 Another clarinet and percussion duet followed, titled Ten Little Things (six excerpts) by Steve Rouse. Matthew Nelson, a D’Addario Woodwinds artist, played clarinet alongside his colleague Greg Byrne, professor of music and director of percussion studies at the University of Louisville. Each of the six movements has a programmatic title and features a different percussion instrument including tubular bells, bowed vibraphone, tambourine, crotales, musical saw, and vibraphone with mallets. The unique qualities of each percussion instrument complimented the versatility of the clarinet as Nelson transitioned from long pitch bends to flashy altissimo runs. 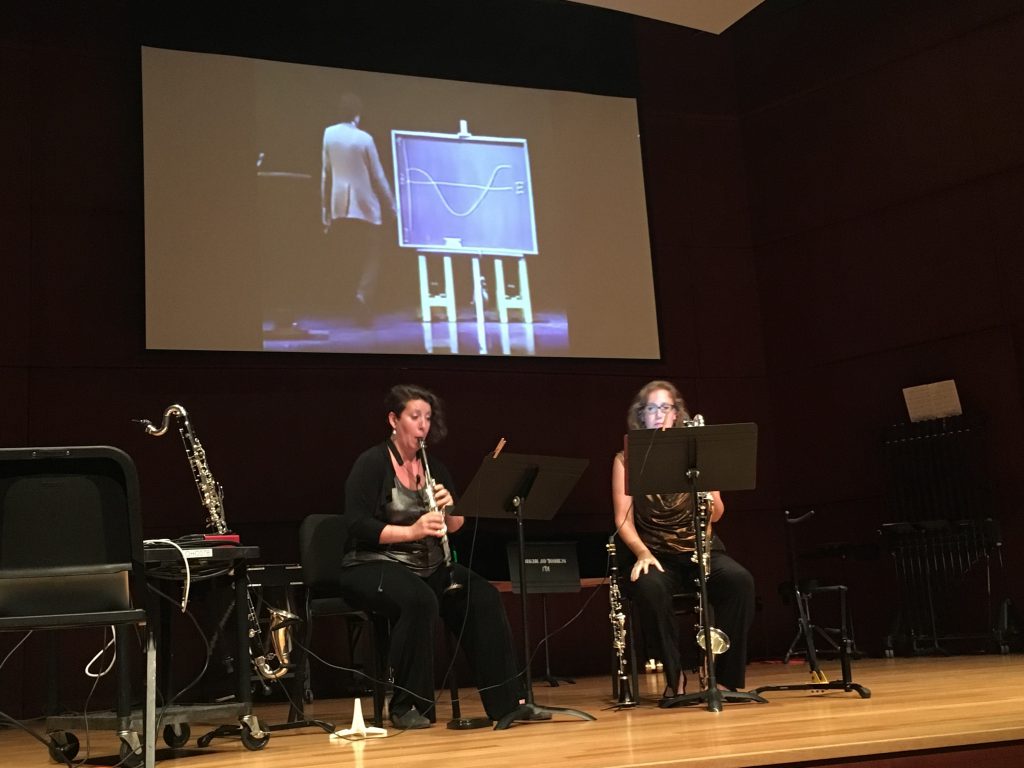 Spatial Forces Duo performed Richard Belcastro’s On the Shapes of Stories. The duo consists of Jessica Lindsey and Christy Banks, both playing soprano and bass clarinets. Before the performance, the composer briefly spoke about the duo commissioning On the Shapes of Stories based on the work of author Kurt Vonnegut. Belcastro used video clips of Vonnegut speaking to shape the composition. There was generally a three part construction of each movement: a short clip of Vonnegut speaking, clarinets playing in imitation of Vonnegut’s vocal inflection, and a development of these themes featuring clarinet and tape. 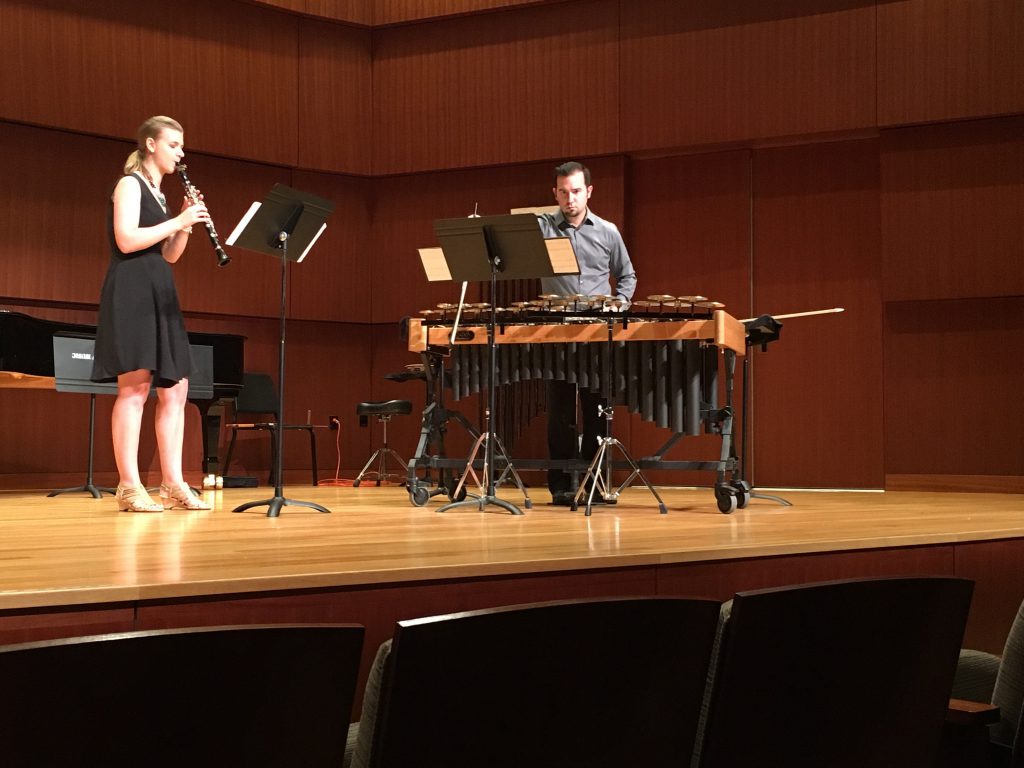 Jennifer Tinberg, E-flat clarinet, and Benjamin Fraley, percussion, perform together as Sources Duo. Their piece, A Curtain of Stars by Jerod Sommerfeldt, was composed in 2014 for the duo. Sources Duo actively commissions new works featuring E-flat clarinet. Sommerfeldt describes his composition as “a meditative work featuring two performers whose rhythmic sensibility is tied to their respective heartbeats.” In this way, different performers and performances may vary slightly dependent upon performers’ heart rates. 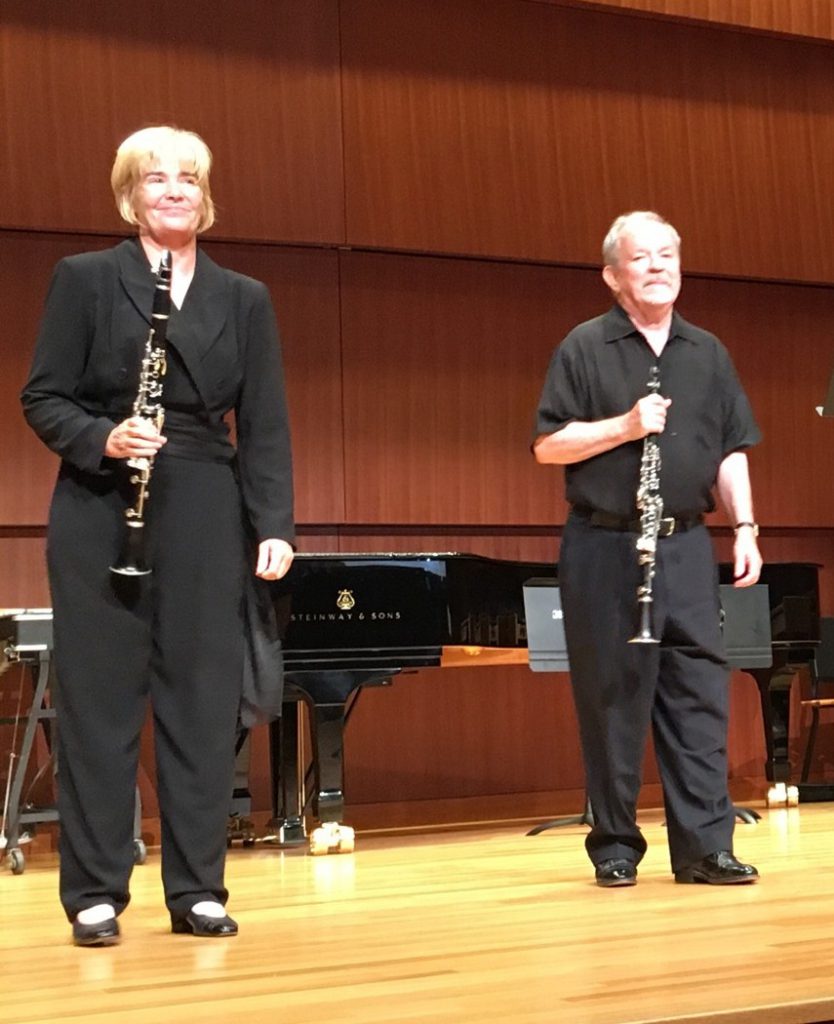 The concert ended with Karen Craig and W. James Jones’ performance of Tango Etudes Duos, composed by Astor Piazzolla and arranged by Exequiel Mantega. This was the premiere performance of Mantega’s 2014 arrangement for two clarinet and percussion accompaniment. This upbeat Latin piece provided stylistic contrast to the rest of the more contemporary compositions.