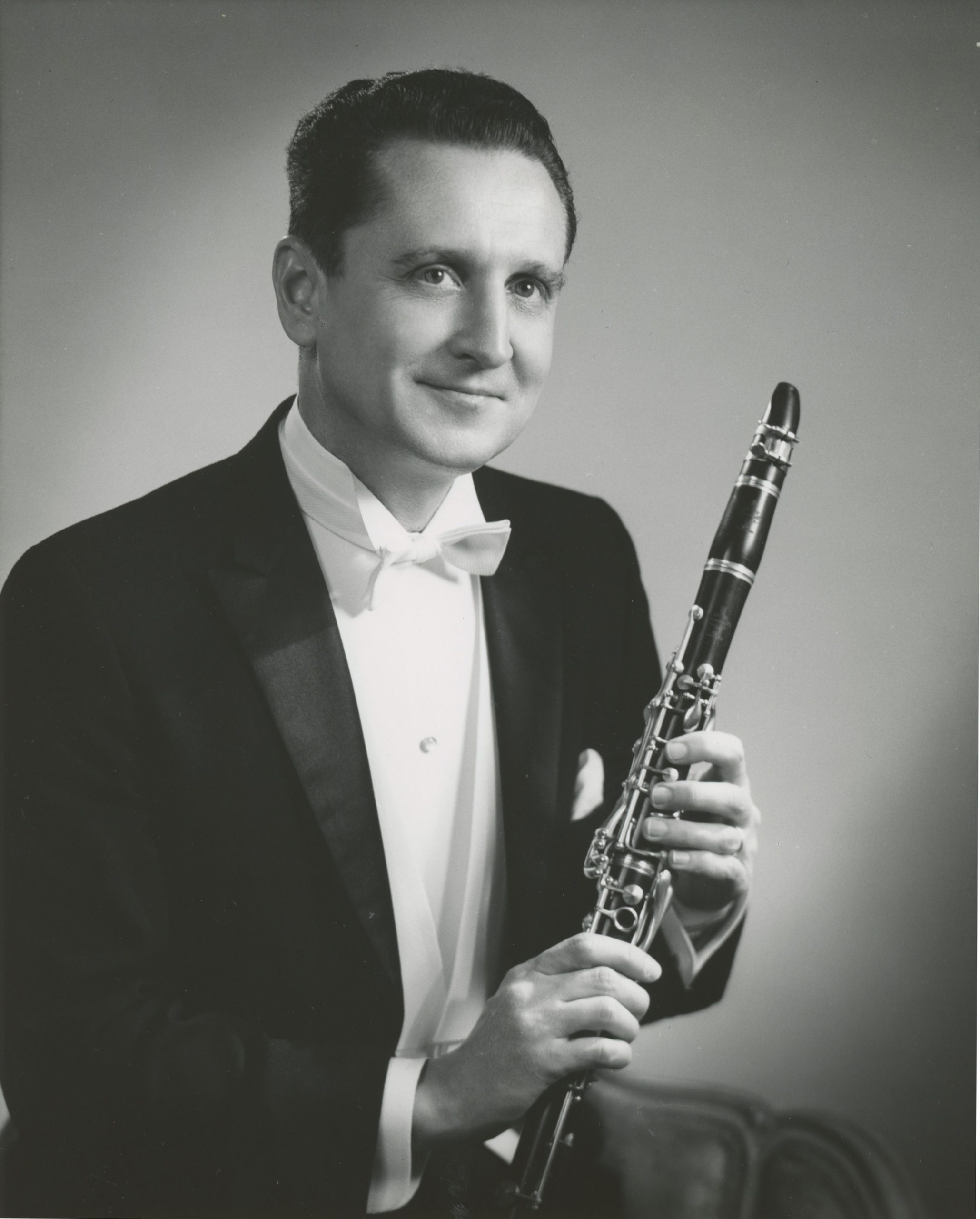 William Carl Dominik, 90, passed away November 6, 2015.  He was born in Lansing, Michigan, June 12, 1925, the son of Mary and Frank Dominik, immigrants from Moravia, and the youngest of three children.  Joining his father in local polka and dance bands while in junior high school, he played the drums and saxophone before settling in with the clarinet.  While still in high school, he also repaired instruments and taught clarinet lessons.

After graduating from high school a semester early in order that he might complete one semester of college before his eighteenth birthday, he was drafted into the Army Airforces during World War II, initially as a clarinetist.  When personnel were needed for other positions, he repaired airplanes and served in an office on the base in Prestwick, Scotland.  When the war ended, he resumed his studies, earning a Bachelor of Music degree at Michigan State College, where he also taught clarinet.  He went on to teach at Bethany College in Lindsborg, Kansas, earn a Master of Music degree at the University of Southern California, teach high school, give private music lessons, and work on airplanes for Douglas Aircraft Company.

After completing his master’s degree, he taught at Oberlin Conservatory of Music at Oberlin College, the University of Wisconsin at Madison, and Texas A & M University in Kingsville, Texas, before returning to USC to earn his Doctor of Music degree while teaching at California State College at Los Angeles and giving private lessons, as well as teaching ESL part-time at an adult education school in Los Angeles.  His clarinet and music training included study with Clark Brody, Robert Marcellus, Kalman Bloch, Joseph Siniscalchi, and Keith Stein.  He played in various orchestras, including at Berkshire Music Center at Tanglewood in Massachusetts, and appeared as a soloist, clinician, and adjudicator in Midwestern and Western states.

William joined the Conservatory of Music faculty at the University of the Pacific in 1967 as a clarinet and chamber music professor, and served on numerous conservatory and campus-wide committees over the years, including the Conservatory and University Faculty Councils, the University Academic Regulations Committee, and several search and evaluation committees.  Upon his retirement, he received the university’s Order of the Pacific and the award of Professor Emeritus.

He was a member of a number of professional organizations, including Phi Mu Alpha Sinfonia, Tau Sigma, Phi Kappa Phi, Pi Kappa Lambda, the Music Educators National Conference, and the International Clarinet Society, serving as the California State Chair for many years.  In addition, he was a member of the Czechoslovak Society of America Fraternal Life.

A memorial will be held December 5 at 2 p.m. at Morris Chapel at the University of the Pacific, followed by a reception in the Regents’ Room.

Donations may be sent in his memory and honor to the American Heart Association (http://www.heart.org), the National Park Foundation (http://www.nationalparks.org), and Save the Delta (http://restorethedelta.org).