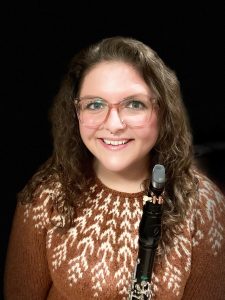 The ICA welcomes new Alaska State Chair, April Jaillet. She is a longtime member of the ICA and the Fairbanks Symphony. She has many clarinet activities planned for clarinetists in Alaska and and we thank her for her enthusiastic support of the clarinet and the International Clarinet Association.

The ICA would like to thank long-time outgoing chair, Mark Wolbers. Mark plans on remaining active in the ICA and the Alaska clarinet community and his continued artistry will be very welcome to the world of clarinetists. The ICA thanks Wolbers for his many years of service.

Clarinetist and life-long Alaskan, April Jaillet, chose the clarinet at age 10. Throughout her youth, she performed with a number of ensembles and was selected for the Alaska All-State Honor Band. April attended the University of Alaska Fairbanks, where she received a Bachelors of Music in Performance(2009) as well as a Master of Arts in Music (2011). Her instructors include Mr. Stuart Hudson and Dr. Jun Watabe. April has been a member of the Fairbanks Symphony Orchestra since 2004, has toured with the Arctic Chamber Orchestra and has served on the FSO Board of Directors as an orchestra representative since 2014. April has traveled throughout the state performing with the Orpheus Project in Juneau and has performed in Anchorage with the Alaska Blaskapelle. In addition to her performance ensembles, April also owns and operates Miss April’s Clarinet Studio, teaching students of all ages with virtual and in-person lessons. When April isn’t playing or teaching clarinet she enjoys knitting, reading, and hanging out with her cats, Gustav and Marin. 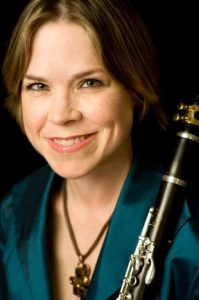 The ICA welcomes new Utah State Chair, Dr. Laura Grantier. Dr. Grantier is a long time member of the ICA in Virginia and recently moved to Utah to assume her new role as Assistant Professor of Clarinet and Director of Woodwinds at Southern Utah University. She has many fantastic clarinet activities planned for clarinetists in Utah and we thank her for her enthusiastic support of the clarinet and the International Clarinet Association.

The ICA would like to thank long-time outgoing chair, Dr. Jaren Hinckley, Professor of Clarinet at  Brigham Young University. Jaren plans on remaining active in the ICA and the Utah clarinet community and his continued artistry will be very welcome to the world of clarinetists. The ICA thanks Dr. Hinckley for his many years of service to the ICA clarinetists of Utah.

Dr. Laura D. Grantier, a native of Denham Springs, LA, earned a Bachelor of Music from the University of Alabama in 1993, an MBA from Averett University in 2003, and a Doctor of Musical Arts from the Catholic University of America in 2012. Her teachers are Scott Bridges, Ken Grant, and Eugene Mondie.

Dr. Grantier is currently Director of Woodwinds and Assistant Professor of Clarinet at Southern Utah University. She teaches applied clarinet, woodwind methods, woodwind chamber ensembles, music appreciation, and theory.  She co-founded the percussion/clarinet Darkwood Duo and formed the SUU faculty woodwind quintet. She is the Utah state chairperson for the International Clarinet Association.

Prior to her appointment with the United States Navy Band, she was pursuing a Master of Music at the Eastman School of Music. As an exchange student, she traveled to Guatemala and Costa Rica in 1990 to perform recitals and teach masterclasses. She has performed at the Morges Music Festival in Morges, Switzerland, and with the Rochester Chamber Orchestra, Annapolis, Arlington, McLean, New World, Tuscaloosa Symphonies, and the National Symphony Orchestra. She was principal clarinet of the American-Russian Youth Orchestra in 1995 and was a semi-finalist in the 1992 Ciudad de Dos Hermanas competition in Seville, Spain and the 1996 International Clarinet Association Young Artists Competition in Paris, France. She has appeared on multiple occasions as soloist with the United States Navy Band, including the 2014 Midwest Orchestra and Band Clinic in Chicago, as well as national tours. She has also appeared as soloist with the Alabama Symphony, Susquehanna Wind Ensemble, Alabama Wind Ensemble, Capitol Wind Symphony, and was also a featured soloist at the 2013 CMEA conference, the 2012, 2014, 2016, and 2019 International Clarinet Association Conferences, at Clarinetissimo, in Seattle, the 2009 GMEA conference, and the 23rd annual Alabama Honor Band Festival.

In 2012, she founded Navy Band Clarinet Day, an annual education outreach symposium for music students and clarinet enthusiasts of all abilities that provide musical enrichment and interaction with Navy Band clarinetists and guests artists representing the pinnacle of the profession from the orchestral/band and academic arenas. Now in its ninth year, the symposium is presented in person to 125 participants annually and livestreamed to 23,000 online viewers globally. Past guest artists include Richie Hawley, Sean Osborn, Ricardo Morales, Jeremy Reynolds, Eugene Mondie, Larry Combs, Julie DeRoche, Mark Gallagher, Kathy Mulcahy, Robert DiLutis, and Mitch Estrin. She is a Buffet-Crampon performing artist.