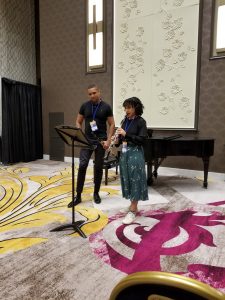 On day 4 of ClarinetFest®, a masterclass was held by jazz clarinetist Felix Peikli. Peikli opened up the masterclass with a short impromptu performance. Two exceptional clarinet students participated in the masterclass. The first participant was Samantha Kopec from the University of Miami who performed the cadenza from the Copland Clarinet Concerto. The second participant was Alejandra Vega Roque from the University of Puerto Rico who performed an unaccompanied piece called Monolog 3 by Erland Von Koch. Felix Peikli gave a helpful perspective on these pieces from the point of view of a jazz artist. He provided interpretation suggestions such as where to take time, where to play more rhythmically, and where to accentuate phrasing and articulations. After working with the two participants, Peikli led a Q&A session in which he talked about his upbringing and education and held an engaging discussion about jazz versus classical genres.