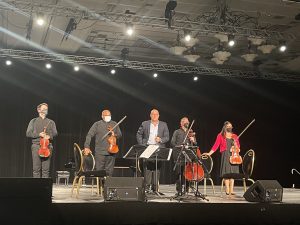 ClarinetFest® 2022’s second evening concert featured headline performers Jonathan Russell, Andrew Simon, Sarah Watts and Guy Yehuda each performing alongside the Dalí String Quartet. The well-attended concert in the large Tuscany Ballroom opened with Jonathan Russell premiering his own composition for bass clarinet and string quartet On Sorrow. This extraordinarily touching piece was originally based on his emotional acceptance of his wife’s battle with cancer, but noted that after the pandemic the piece was universally human. Full of delicate entrances, heart wrenching dissonance and deliberately angry technical passages, the piece was well received by a deeply moved audience.

Andrew Simon’s performance of New Arrangements of Operatic Solos was a delightful shift in style. He breathed new life into well known melodies. Most notable were his singing lyricism, incredible control in extremely soft dynamics and whirling technique in the flashy finale. His rubato and blend with the Dalí String Quartet was dazzling throughout.

For yet another change of pace, Sarah Watts performed a charming yet difficult piece On Shapes and Figures by Jessica Mays. This piece dances with quirky characters and alluring colors. Watts’ blend with the string quartet was seamless and her technical prowess made the bass clarinet just as agile as the violin.

Finally, Guy Yehuda performed Hadibuk (The Possession) Suite by Joel Engel. Yehuda’s seemingly effortless entrances and rich sound added to the mysterious opening atmosphere . His trills and grace notes were even, stylistic and made the music dance. The virtually perfect stylistic matching and intonation between him and the Dalí Quartet was most important to the success of this piece, and the performers did not disappoint.

The second evening concert was met with enthusiastic and well-deserved applause from a very captivated audience.