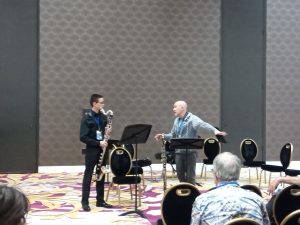 Warm and welcoming, Evan Ziporyn opened his master class talking about his musical background and how he enjoys exploring the technical abilities of the clarinet, particularly bass clarinet. He was joined by four student clarinetists in this session.

Ziporyn headed to the piano and accompanied the first student in the second movement of Malcolm Arnold’s Sonatina. He began by asking the student what they knew about the composer, and he made the point that the time, care and attention we spend researching our most historic composers can also be spent on a composer like Arnold. He asked the player and the audience to consider what it meant to play a lullaby, even one without words. Running the movement a second time, the student was asked to create an atmosphere of intimacy beginning with a first note characteristic of a whisper. Moving on to the vivacious movement three, Ziporyn encouraged more furious energy throughout.

The second student performer played Introduction and March, a core solo and ensemble piece for bass clarinet, by John Rarig. Together, Ziporyn and the student worked on creating a dramatic sforzando on the first note. Ziporyn stressed creating very clear contrasts, and they played portions of the piece together to align on what that might sound like; someone who was not looking at a score needed to be able to aurally identify which notes were accented versus not.

The third student performer brought Folklorico by Sebastian Tozzola. Informed by Argentinian rhythms, colors and folk music, it began with an extensive cadenza. Ziporyn acknowledged it is often intimidating to play a piece by a living composer who will hear it and one who is a bass clarinetist themselves! Regarding the opening, Ziporyn and the student discussed the fine line between interpretation and observing what is on the page; if you decide to interpret differently, why? Can you justify it? Ziporyn challenged the student to hold even longer phrases through improved breath support, in addition to taking more time between phrases to keep the listener in suspense. Jumping ahead to a section with steady rhythmic content, Ziporyn mentioned differentiating grace notes versus sixteenth notes versus triplet rhythms as an integral part of interpreting Latin American music.

The final set of performers was a bass clarinet duo playing Bach’s Toccata and Fugue in D minor, arranged by Jon Russell. Ziporyn discussed the art of making two bass clarinets sound like one melded instrument, as well as ensuring that the melody was always prominent in the texture. After spending time workshopping the pacing of the opening, the duo started slower and drew a lovely accelerando to the arrival point where the tempo became fixed and steady.

Thank you to our masterclass performers! And thank you Evan Ziporyn for joining us at ClarinetFest 2022 and sharing knowledge and insight in this masterclass.