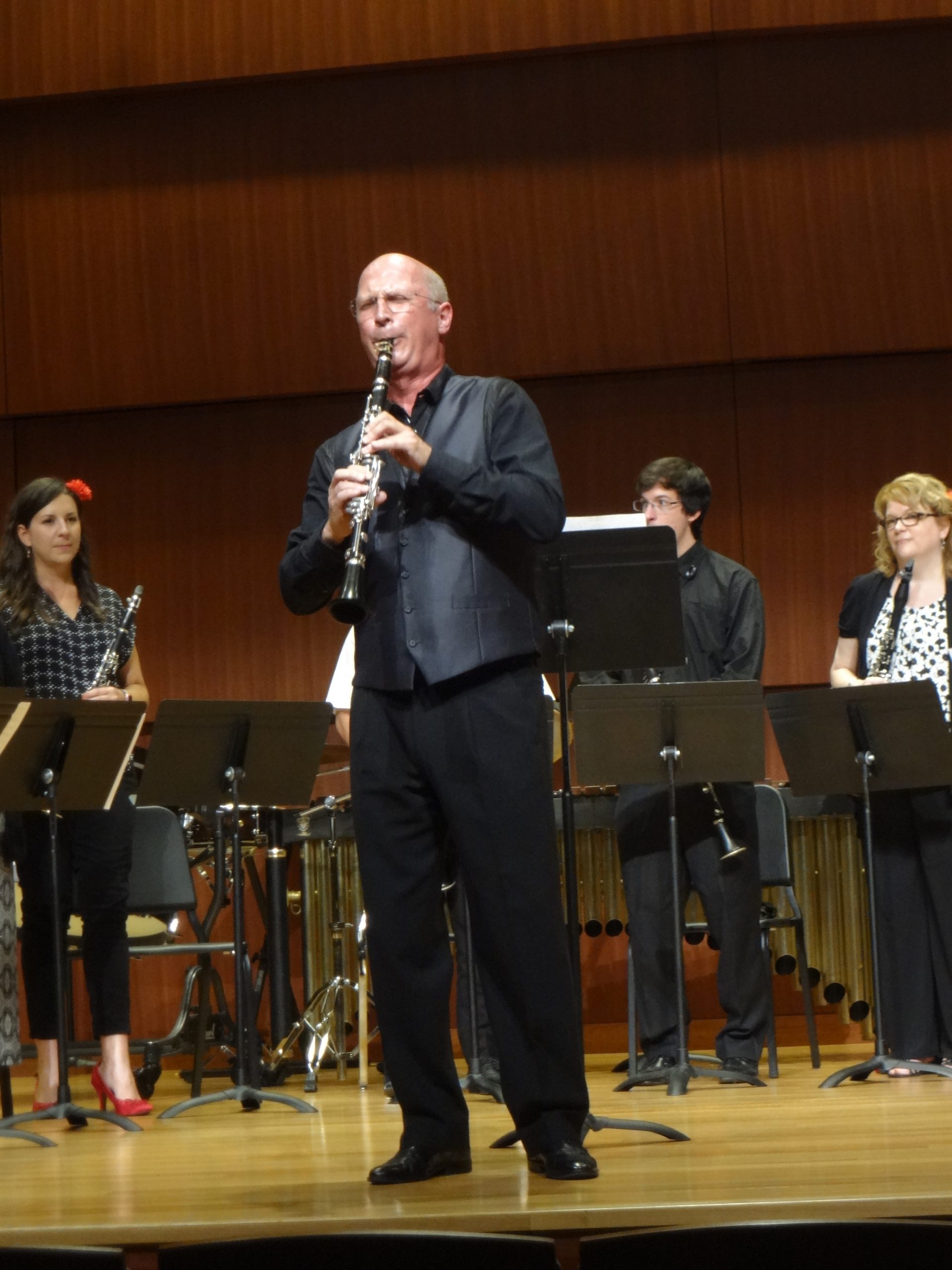 “Orange County Clarinet Consort is a performance ensemble made up of professional and freelance clarinetists and music educators. OCCC’s new affiliation with the California State University–Fullerton Clarinet Club integrates students from the studios of Håkan Rosengren and Burt Hara. In 2010, the Orange County Wind Symphony Clarinet Ensemble was formed and performed at the 2011 ICA ClarinetFest® at Cal State Northridge. In 2012 the OCWSCE was reformed as the OC Clarinet Consort, and has performed in several Southern California venues as well as at the 2013 ICA ClarinetFest® in Assisi, Italy.”

The first piece the ensemble played was an arrangement for clarinet choir of Devil Sticks: Equilibristics for Five Clarinets, by Scott McAllister (b. 1969). Alternating down- and up-beats between the bass and contrabass parts and the E-flat, the piece’s fast runs and melody contrasted with a slow, almost chant-like theme. According to the program notes for the piece, “devil sticks are the gyroscopic sticks used in equilibristics, the circus act of balancing many objects simultaneously. The opening of the piece is comically reminiscent of a circus with the prominence of the bass instruments and E-flat clarinet playing shifting rhythms and accents. Musical gymnastics build to a frenzied climax interrupted by a melancholy middle section, which leads back to a repeat of the first section.” A great opener, the piece ended with a forceful, descending run.

Following the McAllister, Worsley thanked the audience for attending and introduced the next piece, the world premiere of Santa Anas for Clarinet Choir, by Clifford J. Tasner (b. 1963). The ensemble’s home state of California, she said, is known not only for movies and earthquakes, but also for fires. Strong, dry winds called the Santa Anas blow from the Great Basin through coastal Southern California and northern Baja California, acting as a catalyst to start the quick-spreading and destructive fires. She describes this next piece as a poetic onomatopoeia of these winds and fires, and of the “ominous feeling in the air” that accompanies them. Though it consists of six movements (I. “Gale Winds at Night”; II. “Hot, Shimmering Morning”; III. “Sweltering Afternoon”; IV. “Wildfires”; V. “Choking on Smoke”; VI. “Dark Deeds When the Wind Blows”), the piece is through-composed and there are no breaks between movements. In his program notes, the composer provides a chronological description of the piece: “The ‘Hot, Shimmering Morning’ breaks and you can see the heat refracting the air above the asphalt streets and cement sidewalks. A ‘Sweltering Afternoon’ follows with an overwhelming sense of torpor. The heat always ignites ‘Wildfires’ as the flames rapidly dance through the dry, dead brush and threaten houses on hillsides. A dark, smoggy pall of particulates rolls in from the hillside, and soon, Los Angelenos are ‘Choking on Smoke’ – coughing from the soot. The night comes on and the region is set on edge for ‘Dark Deeds When the Wind Blows.’ The hum of old window air conditioners provides an underscore to all sorts of angry, murderous thoughts. Before long, the wail of sirens fills the air. And then, just before dawn the winds die down and the brutal heat wave passes. A sense of calm is restored.”

The piece began by creating an ominous atmosphere, with the winds represented by flowing rubato runs accompanied by hairpin dynamic swells. As these runs gained in power, seamlessly passing from part to part across the ensemble, the piece took on some of the characteristics of music typically associated with desert scenes. Then, the high voices exchanged soft, staccato notes and trills over a strong and ominous contrabass and bass clarinet melody. The music became strong, forceful, and accented, and flutter tonguing was used to enhance the frenzied feel of the movement. In the fifth movement, ensemble members physically coughed loudly whenever they were not playing. The bass rhythm returned, again accompanied by ascending and descending runs with hairpin dynamics in the soprano clarinets. A beautiful low E-flat melody was followed by the firsts and seconds, playing on only the barrel and mouthpiece, glissandoing up and down in imitation of sirens. The piece ended with a dynamic swell, then just air.

Finally, the ensemble performed the third movement, “Riffs for Lenny,” of Frank Ticheli’s (b. 1958) Concerto for Clarinet, arranged by Jessica Wilkins. This was the world premiere of this arrangement. Soloist Håkan Rosengren and percussionist Dr. Matthew Coley joined the ensemble. Before playing, Rosengren introduced the concerto to the audience. Rosengren had commissioned the piece and premiered the both the original version for orchestra and the wind ensemble version in 2010. Rosengren revealed that the majority of the Orange County Clarinet Consort members were former students of his. The piece began with the ensemble, playing the irregular rhythms typical of Bernstein, accompanying the soloist’s glissandos and long, held notes. A variety of percussion instruments, harmonica-like trills, and flutter tonguing provided interesting timbres and textures to enhance the solo. As the performance approached its exciting conclusion, a steady cymbal rhythm supported the solo line and descending runs ended with stomps or claps from the ensemble and hard percussion hits. Alternating runs between the soloist and the ensemble led to the Rosengren holding a high altissimo note, ending with a fast, descending run and bass drum hit. Rosengren then surprised the audience by returning to the stage to play the third movement of Igor Stravinsky’s Three Pieces for Clarinet Solo as an encore.