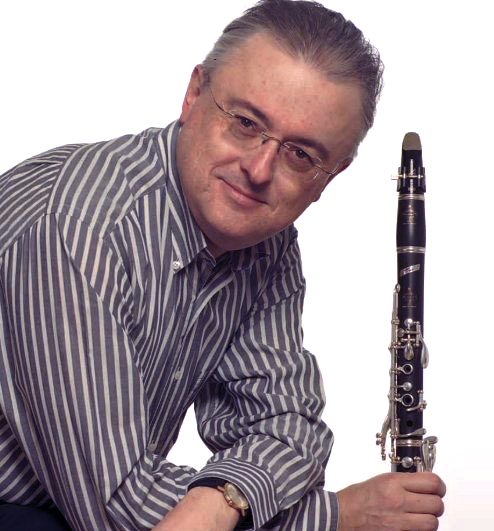 No one could be left unmoved after listening to a performance of the Belgian/Flemish clarinettist Eddy Vanoosthuyse.

Praised by the international press, this musician has gained a worldwide recognition for his personal interpretation and remarkable technical and musical qualities.

Vanoosthuyse works with some of the most high standing composers of his generation as John Corigliano, Olivier Messiaen, Alfred Reed, Dirk Brossé, Hans Zimmer, Arturo Marquez, Nicola Piovani, André Laporte .. and young talents as Oscar Navarro, Eric Desimpelaere and Bart Picqueur. He performs the premiere of different concerti of Brossé, Van der Roost, Louel, Verbesselt, Laporte, Goddaer, Marquez, Matthys … A special mention deserves the world premiere of the concerto that oscar winner Nicola Piovani (film music for “La Vita e Bella) dedicated to him, …He also plays chamber music by, among others, Verbesselt, Swerts, Hendrickx, Van Haute ….. He performed the Belgian premiere of the concertos of Corigliano and Carter.

He has a trio with first prize winner of the Queen Elisabeth Competition, Vitaly Samoshko (piano) and Mikhael Kugel (viola). He has performed more than 150 times the Quintet of Mozart with various international string quartets including the Isaye Quartet, Ciurlionis Quartet, Vilnius Quartet, Simon Bolivar Quartet, Daniel Quartet, Arriaga Quartet and his own ensemble.

Eddy Vanoosthuyse gives masterclasses and is guest professor at universities and concervatories in 4 continents. He was selected for the World Philharmonic Orchestra (Georges Prêtre) and invited for the Symphonicum Europae (New York, Lincoln Center, Fisher Hall).

Vanoosthuyse received different prizes and awards, including those from the ‘Chinese Clarinet Society’ and those from the city of Lima. In 2013 he received the ‘Torenwachtersprijs’ from Governor Jan Briers for his international career. In 2014, the Union of Belgian Composers honored him with the prestigious ‘Fuga Trophy’. In 2015, ‘Klassiek Centraal’ distinguished him with a Golden Label for his CD recording of the concerti of Corigliano and Carter. In 2018 he was unanimously awarded the’ Honorary Member’ of the International Clarinet Association (the highest award of the ICA for an ‘exceptional Career Achievement Award’).

Eddy Vanoosthuyse is artistic director of the ‘International Clarinet Competition, Ghent’. He is vice-president of SWUK (Flemish non-profit organization that supports young musicians at the beginning of their career) and a founding member of the ‘European Clarinet Association’ (Kortrijk 2010). He was member of the jury of several international competitions (Belgium, France, Spain, Italy, USA, China, …). He is president of the ‘International Art Competition Singapore’.

Eddy Vanoosthuyse is clarinet soloist of the Brussels Philharmonic, professor at the Royal Conservatory of Ghent (Hogeschool Gent, School of Arts) and the Fontys Conservatory of Tilburg. 35 of his former students are affiliated with professional orchestras and / or professor at conservatoires and universities in Europe, Asia, North, South, and Central America and South Africa.