Where were you when the first man set foot on the moon? Where were you when you heard that planes had hit the Twin Towers? … I can clearly remember where I was when Bert Six phoned me to say that Guido and Jef Six had died in a tragic car crash an hour earlier. I was in my car and I immediately pulled over. I don’t know how long I stayed there, unbelieving, stiffened with astonishment. 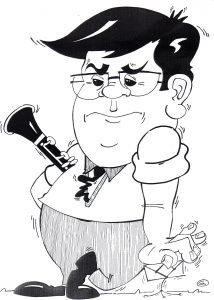 The family asked me to take care of the musical part of the funeral; not an easy task. We composed a clarinet choir, based on Guido’s Claribel and expanded with friends from all over the world (including Robert Spring). This was Guido: a man with an opinion and loved by so many. After the service, we decided with Chantal, Bert, Tim and Guido’s brother Gaby to complete Guido’s newest project: the ClarinetFest® 2018 in Ostend, Belgium.

Guido had already contacted me about this event several times before. He wanted my opinion on who to invite and how I could help him. He had made the first headlines and one thing was clear: he wanted to organize the biggest and best festival ever… a huge challenge when I began as artistic director of the 2018 festival. Fortunately, Bert is always there to help me when it comes to technology. Chantal knows everyone in Ostend and, as she is also an event manager, she is the ideal person for the general organization of the festival. Gaby is the perfect treasurer, and thus, we have the greatest team to fulfill Guido’s dream.

My main goal was to organize a festival to everyone’s liking; it had to be a feast for everyone!

I think this idea rapidly spread, because I have been getting lots of mail, phone calls and messages with ideas and suggestions.

The ClarinetFest® 2018 wants to refresh ClarinetFest®, and, along with the new faces, new projects are presented.

One new idea is the collaboration with five composers-in-residence. 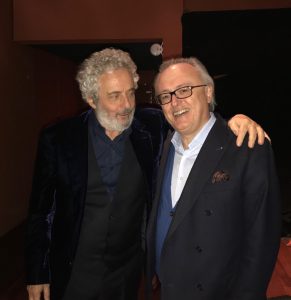 The composers will be at the festival, their music is spread all over the festival and they will each get a one-hour concert where they can present their music played by an international group of musicians.

We have two artists-in-residence:

The many colors that both these artists use evidently refer to the color palette musicians/clarinet players use when they play their music.

The third new item is the start of a festival within the festival. The Guido Six International Clarinet Choir Festival gets its first edition in Ostend. The board of the ICA has agreed to adopt this festival into its ClarinetFest® each year.

The choirs will be given the opportunity to play a concert at the festival, but also in other places of the beautiful city of Ostend (a city at the Belgian seaside).

The festival will be held at Thermae Palace. This brings back the nostalgia of 1999, when Guido and the Six family organized the festival for the second time (first time was in Ghent in 1993). The majestic hotel will be the center of ClarinetFest® 2018. The international exposition, the lectures and the concerts will be played in two halls.

Every afternoon and evening, the concerts with orchestra are played at the prestigious Casino Kursaal. Due to the huge success of the festival, three extra halls at the Kinepolis cinema are also used. These three locations are within walking distance (but we also provide a shuttle service). Master classes and rehearsals are held at the conservatorium of Ostend.

Finally we are also very pleased to mention that we can present the following orchestras and ensembles: 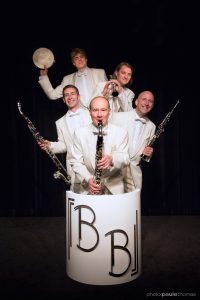 We will also use a string quartet in residence.

Chantal Six-Vandekerckhove has also organized an excursion to the region where the First World War was fought. The former governor of West-Flanders, Paul Breyne, who is also responsible for the commemoration of the First Word War (1914-1918), will personally give a tour in and around the “Westhoek.” At 8 p.m. on the day of the excursion, the memorable “Last Post” at the Menin Gate of Ypres will be attended. The Menin Gate is the gate to the city that was built in 1927 by the British on the east side of the city. It is a commemoration for the nearly 55,000 British soldiers who lost their lives and could not be identified. The day is finished by a work for clarinet and narrator, conducted by a string quartet, bass clarinet, piano, percussion and a children’s choir. During this concert, drone images of the war region will be shown. This concert is held under the auspices of the Association of War Veterans of Belgium.

We are convinced that in the year 2018 (100 years after the end of this atrocious war) a visit to this region is essential.

I hope I have convinced you to come to Ostend! Enroll now, book your hotel ASAP at special festival rates until March 31, 2018. More details are on our website.

The full program will be published in the next issue of The Clarinet.

Hope to see you in Ostend! v