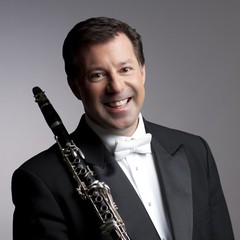 Mr. Williamson is currently on the faculty of DePaul University in Chicago, IL. He has served on the clarinet faculty at Columbia University and the Mannes College of Music in New York City, as well as at the Pacific Music Festival in Sapporo, Japan and the Domaine Forget International Music Festival in Québec. He has recorded for the Sony Classics, Telarc, CRI, BMG, Naxos and Decca labels and can be heard on numerous film soundtracks.

An avid soloist and chamber musician, Mr. Williamson has performed extensively in the United States, Europe and Asia. He has collaborated with such artists including Yo-Yo Ma, Jeffrey Kahane, Anne Marie McDermott and many others, as well as with his fellow CSO musicians as part of CSO Chamber Players whose April 2019 program in Orchestra Hall features Bartók’s Contrasts and Messiaen’s Quartet for the End of Time. He made his CSO solo debut with the Mozart Clarinet Concerto in 2016 under guest conductor Gennady Rozhdestvensky, subsequently performing the work on the Orchestra’s East and West Coast tours with music director Riccardo Muti during the 2017/18 season. Mr. Williamson also performed Copland’s Clarinet Concerto with the Sapporo Symphony in Kitara Hall during the 2018 Pacific Music Festival.

He received his bachelor’s degree and performer’s certificate from the Eastman School of Music, and his master’s degree from the Juilliard School. As a Fulbright Scholar, he furthered his studies at the Hochschule der Künste in Berlin. His past teachers include Peter Rieckhoff, Charles Neidich, Kenneth Grant and Michael Webster. Past awards include the Saunderson Award from the Coleman Chamber Music Competition; the 1997 New York Concert Artist Guild Competition Nathan Wedeen Award; and the Grand Prize in the 1st Annual Buffet Crampon North American Clarinet Competition in 1994. He was also the only American semi-finalist in both the 1993 and 1998 ARD International Music Competition for Clarinet.